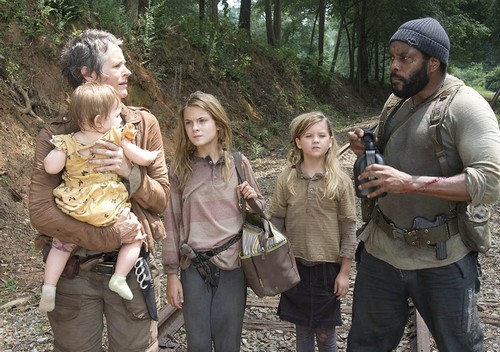 THE WALKING DEAD returned to AMC tonight and it was other great episode and it highlighted just how great an actor Norman Reedus (Daryl) is and Beth Greene (Beth) are.  I cannot wait to see what happens on next week’s episode.  Good news, we have have managed to get our hands on a sneak peek video and some insight for you below on what is going on next week episode, “Alone.”

On tonight’s show it was all about Daryl and Beth – we got lots of background.  The show did not really move much ahead tonight.  We just got to see how Daryl and Beth grew close.  Did you watch tonight’s episode?  We did and we recapped it right here for you.

Spoiler alert: If you’re one of those people who doesn’t like spoilers, stop reading now! We have some juicy spoilers for you about the season 4 episode 13 of AMC’s “The Walking Dead.”

AMC Official Synopsis: “One group finds a shelter; a group has a realization about protection.”  We are going to find out what happened to Maggie, Bob, and Sasha.

On next week’s show AMC has not given us a huge teaser but we have to guess that one of the groups we will see again is Tyrese, Carol, Mika, Lizzie, and Judith. Also with Judith I would say it is even more important for this group to find shelter.  I am hoping they hook up with Rick, Michonne and Carl, it would be good for Rick and Carl to find out that Judith is still alive.  Maggie, Bob, and Sasha are in trouble.  Remember someone is suppose to die by the end of the season and I am hoping it is not Maggie.

The Walking Dead Season 4, Episode 13 “Alone” airs on AMC on March 9, 2014. People familiar with original comic book series written by Robert Kirkman claim that the show is sticking more closely to the original story this season. Check out the preview videos from episode 13 below and let us know in the comments below what you think!