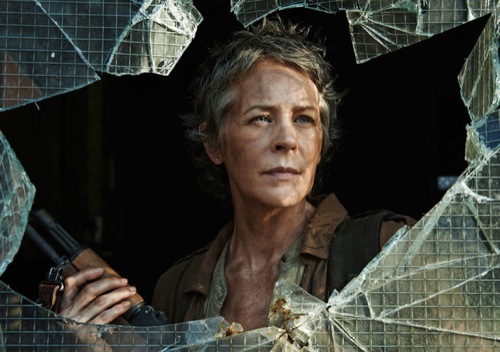 In The Walking Dead season 5 spoilers we saw and discussed in the premiere episode that Carol showed that she had what it takes. She cleaned house, and not with a broom. For fans who have been watching since season one, the evolution and transformation that Carol has undergone has been worth watching. She has gone from being a victim to a badass within five seasons. Let take a look at her.

Season One: In season one, we are introduced to Carol. She is camping with the other refugees outside of Atlanta. Carol is with her abusive husband and her daughter Sophia. We see Carol as she is during that season — meek, cowering, frequently bruised. Carol only shows tiny hints of the toughness and strong will she is keeping hidden.

When Carol’s abusive husband is killed by a walker, we can almost see the inner turmoil Carol has. She is relieved to be free of him, but she is terrified also.

Season Two: Carol is now on her own within the group. She only has herself and her daughter to take care of. As season two begins, though, Sophia disappears and Carol is distraught. Others in the group go off in search of Sophia while Carol stays put with the other women and children.

Halfway through season two of The Walking Dead though, we start seeing changes in Carol. She begins a tentative friendship with redneck Daryl. Daryl’s search for Sophia seems to bond the two of them together.

Sophia is found, but has become a walker. Daryl comforts Carol but she suffers a breakdown that could be the turning point for her: She no longer has anyone but herself and perhaps she decides at that point that it’s time to toughen up. Throughout much of season two, Carol seems to elicit pity and even ridicule from the other characters. She is not seen as a respected member of the group.

Season Three and Four: In season three and four, we see a new Carol. That toughness she has kept hidden begins to blossom. Carol takes charge of Lori’s pregnancy and uses a female walker to practice a c-section on in case it is needed. We see Carol and Daryl’s friendship grow, but it is several episodes into season three before we realize that Daryl cares more than he lets on. Season three continues to show Carol’s personality and grit emerging.

Season four, though, show us a side of Carol that we never knew existed. While previous seasons relegated Carol to a position of tending to children, the wounded, and keeping the home fires burning, in season four she steps up into a leadership role. Carol also takes charge and makes hard decisions when faced with a deadly virus that threatens her entire group. She makes even tougher decisions regarding life and death toward the end of season four.

Season Five: The season five premiere showed us what Carol is really made of. She is ready and willing to do what is necessary to protect those she cares about. Carol donned zombie blood to camouflage herself and she set to work rescuing her friends from the cannibals at Terminus. She reunited with Daryl (and who didn’t cheer when that happened?) and buried the hatchet, so to speak, with Rick.

What’s coming up in season five for Carol? It’s uncertain, but what is certain is that Carol is no longer a victim or meant to be ridiculed. She deserves our respect and has established herself as an integral part of the group. Check out CDL tomorrow for more The Walking Dead season 5 spoilers and discussion.