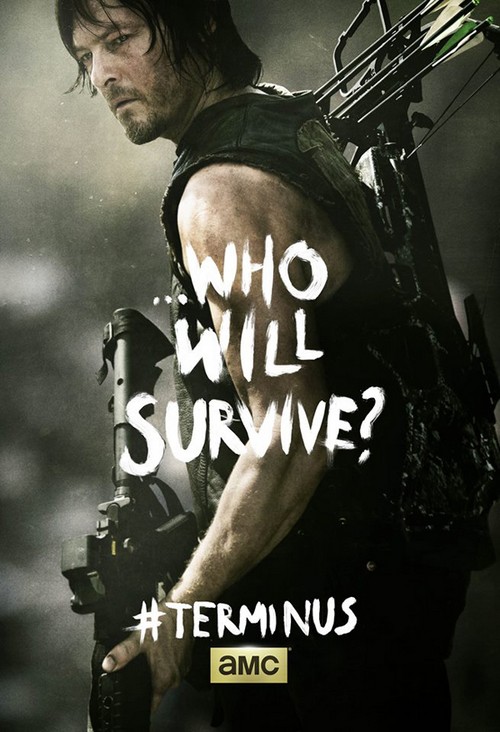 The Walking Dead is back! Well, not quite yet, but sneak peaks showing absolutely nothing are back. Talking Dead teased a sneak peak video of Season 5 last night, but since it’s a teaser trailer, there isn’t much revealed in the clip that we don’t already know.

AMC’s sneak peak video showed Carol [Melissa McBride], Tyreese [Chad Coleman], and Judith traveling along those infamous train tracks when Carol sees a huge herd of walkers making their way towards her. She and Tyreese run into the woods to get away from the walkers, still bearing Baby Judith. The clip ends with the walkers still approaching, but not before revealing a sign for Terminus in the backdrop.

Obviously, Carol, Tyreese, and Judith were the only members of the group that didn’t meet up with Rick Grimes [Andrew Lincoln] and co. at the end of the fourth season. Unfortunately, Rick and co. are currently trapped in a metal containers, not knowing where they are, who they’re with, or why they’re being locked up. Obviously, nobody at Terminus is ‘good’, but the fan speculation has ranged from cannibalism [likely] to religious fundamentalism gone wrong [also possible]. It could easily be a combination of the two, since we also some creepy candles and cult-like behavior at the end of the fourth season.

The Walking Dead’s 5th Season premieres in October of 2014, with the entire cast from the previous season returning. Well, except for the cast members that have died, which is unfortunately a pretty high number.

What do you guys think about the teaser? Are you excited? Let us know your thoughts in the comments below.