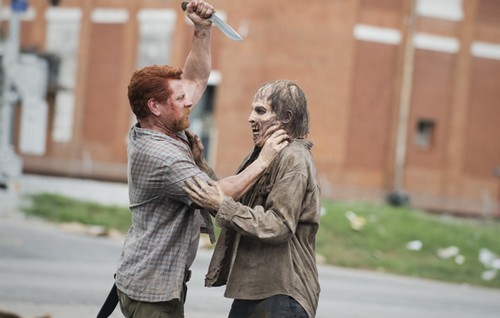 The Walking Dead spoilers for season 5 episode 5 “Self Help” promise to keep fans riveted to their seats as our heroes try to rescue Carol and Beth from the hospital. While Beth was clearly captured at the end of The Walking Dead Season Five “Slabtown” episode 4, (recap here) not much else is very clear heading into the “Self Help” episode 5 coming up on November 9. According to the previews, we see Abraham and the crew heading off among a sea of zombies. There are several distinct kills that show us that zombies are about to take center stage once again and not a moment too soon.

Carol showed up being whisked into the hospital at the end of “Slabtown” and almost certainly was captured and brought against her will. It is hard to imagine Carol volunteering to join them or being saved by them. It seems more likely she was tricked or apprehended. We will have to wait and see. Despite this, it is nice to see that Beth will not be alone at Slabtown until the group inevitably makes the save.

Another mystery that remained unsolved was who was with Daryl when he came out of the woods in episode 3? Many assume it was to be Beth. That clearly is not the case.

Perhaps it is the orderly Noah that helped Beth try to escape. He did get away though it is hard to imagine how he would find his way to Daryl. Whatever the case, it seems inevitable that the group will have to get a plan and go after Beth and Carol.

As for the next episode it is clearly going to be about Abraham, his back story and the attempt to get Eugene and his cure to Washington. It is also clear that things go very wrong for the group at some point. There are zombies all over the place and it appears that the group may even be fractured at some point. After an entire episode The Walking Dead with very few zombies, a good undead episode will be a welcome sight for excitement and thrills.

The Walking Dead is built on scares, drama and zombies mixed with a deep and intertwining story. If you take away any one of these parts, the show becomes something else. For the first time in five seasons, I was actually bored at parts of the Slabtown episode. It is understood that it was necessary to tell the story, but they really needed to mix in some action along the way. In the end, it will be worth it like always.

It is interesting to note that Maggie and Glenn went along with Abraham on this all important trip and they will ultimately be the characters that link back to Rick and the group. Some folks think that they might do this sooner rather than later, but we have no definitive proof that will happen. One thing we do know…The Walking Dead will keep the surprises coming.