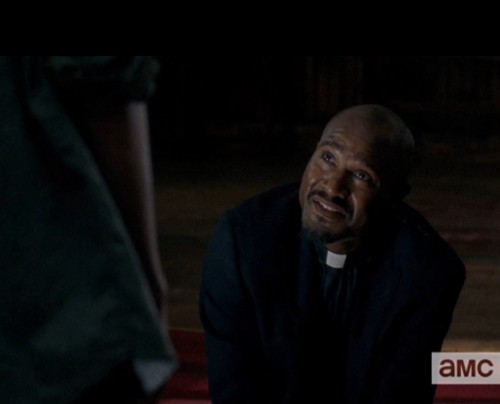 The Walking Dead spoilers for Season 5 for Episode 7 ‘Crossed” promise some zombie action that will delight fans of the show. The Walking Dead is moving at a much, MUCH faster pace in Season 5 than it did in Season 4, and for that, we should be grateful. Now, that doesn’t necessarily mean Episode 6 was the best episode of the season, but it moved pretty quickly and had some illuminating character moments for Carol [Melissa McBride] and Daryl [Norman Reedus]. However, now that we’ve spent an episode with them, an episode with Abraham and co, and an episode with Beth [Emily Kinney], it’s time to return back to Rick [Andrew Lincoln] and company. After all, what is the Walking Dead without Officer Rick?

The sneak peak video from The Walking Dead Episode 7, titled ‘Crossed’, shows Father Gabriel talking to Carl [Chandler Riggs] and Michonne [Danai Gurira] about their plans. He tells them that there’s little chance of them staying in one place again, and that nobody can be trusted. In other words, he tells them something that they already knew, but couldn’t really come to terms with until now.

There’s no prison, there’s no Woodbury, and Terminus showed them that any sanctuary would be risky at best and outright dangerous at worst. And with baby Judith to protect, taking those kinds of risks is no longer an option for them. The realization slowly dawns on Michonne’s face towards the end of the clip, but as audience members, we already know they’re headed for the Alexandria Safe Zone, so we’re not too worried.

Now, the teaser video from the next episode did show that we’d have some Beth thrown into the episode, and probably her attempts to stand up to the hospital creeps. However, most of the episode will focus on Rick and co getting ready to bring down the hospital in downtown Atlanta, and it will likely end with a decent-sized cliffhanger before the whopper of a mid-season finale two weeks from now.