BY Amanda Austin on June 24, 2014 | Comments: 4 comments
Related : General Hospital, Soap Opera, Television, The Bold and the Beautiful, The Young and the Restless 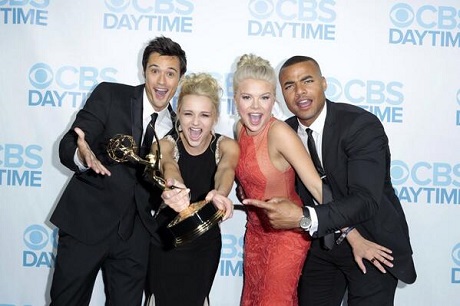 I think I speak on behalf of all General Hospital fans when I say, “Why did the cast of General Hospital even bother showing up for the 2014 Emmy Awards?” If ever there was a cause to believe the Daytime Emmy Awards are rigged, it would be the number of trophies that the popular ABC soap opera took home last night — or lack thereof.

There were clearly some disgruntled fans when the list of 2014 Daytime Emmy Nominees was released earlier this year, and the popular consensus was General Hospital had been seriously snubbed. They were not nominated for Outstanding Drama…but the short-lived internet reboot of One Life To Live was. No one could have predicted how badly General Hospital was really going to be slaughtered at the Daytime Emmy’s Ceremony though. The soap opera only took home two of the most overlooked Daytime Emmy categories, “Outstanding Casting” and “Outstanding Drama Series/Makeup,” which it tied for with CBS’s Bold and the Beautiful.

The Young and the Restless cleaned house last night at the 2014 Daytime Emmys, taking home seven major trophies including the coveted “Outstanding Drama Series.” While TPTB at The Young and the Restless praise Jill Farren Phelps for all of their success and boast about the new additions to their trophy case, let’s just keep in mind that those awards were earned during 2013. During 2013, Y&R had Michelle Stafford, Billy Miller, and Adam Muhney. Since 2013 ended, Y&R has lost three of their major stars, their ratings have dropped drastically, and General Hospital even has them beat on a few key demos.

Are the Daytime Emmy Awards rigged? Well, at this point it is anyone’s guess. The true test will be next year when they hand out Emmys for 2014, if The Young and the Restless still takes home over half the awards after this disastrous year and General Hospital is snubbed again after they have improved by leaps and bounds, then yes…the Daytime Emmy Awards are clearly rigged.

Check out the photos from the Daytime Emmy Awards 2014 below!