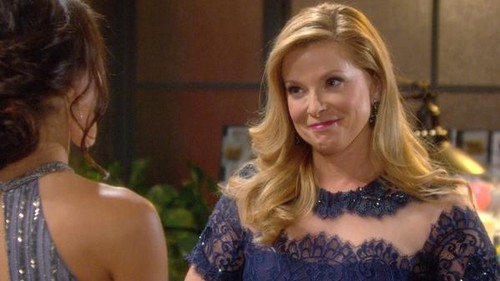 The Young and the Restless spoilers for Wednesday December 31 tease an exciting and action-packed episode of the CBS soap as our favorite Genoa City residents celebrate New Year’s Eve. Rumor has it Y&R fans will not want to miss a single second of Wednesday’s episode! Everyone who is anyone in Genoa City heads to the club to celebrate New Year’s Eve – and when the clock strikes midnight there are some unexpected kisses.

According to The Young and the Restless spoilers, Phyllis finally makes it to the New Year’s Eve party – where she walks in and finds Jack trying to convince a delusional Kelly that he is not in love with her and he truly wants to be with Phyllis. Y&R spoilers tease that Kelly is becoming more and more out of touch with reality – but Phyllis is far behind her. On December 30 Phyllis accuses of Kelly of sabotaging her, syphoning gas out of her car, and spying her.

The Young and the Restless spoilers reveal that romance is in the air for some couples, and other couples crash and burn on December 31. Noah announces to his friends that he is never getting married, which obviously doesn’t sit well with his longtime girlfriend, Courtney. Meanwhile, newlyweds Summer and Austin’s New Year’s Eve celebrations have a damper on them as well because Austin has to work the party, and Summer spends most of it on the phone with Kyle Abbott. According to Y&R spoilers, Mariah and Kevin share a romantic midnight kiss on December 31, as well as Harding and Abby Newman. New Year’s Eve ends with Victoria and Stitch making passionate love!

In other The Young and the Restless news, en route to the New Year’s Eve party, Nikki Newman decides to stop by the park to pay her respects to the late Katherine Chancellor. While she is speaking aloud to the memorial, Paul Abbott overhears her confessing that she has fallen off the wagon and begun drinking again. After confronting her, Paul agrees to keep Nikki’s secret for her from her friends and family.

So, Y&R fans, are you excited for a new year in Genoa City? Do you think this is the end of Noah and Courtney or Summer and Austin’s relationships? How do you feel about Mariah and Kevin getting together? Who is crazier, Phyllis or Kelly? Let us know what you think in the comments below and don’t forget to check CDL tomorrow for more The Young and the Restless spoilers and news.