The Young and the Restless Spoilers Feb 26 – Is Ian Ward Threatening Nikki He Will Brainwash And Rape Summer? 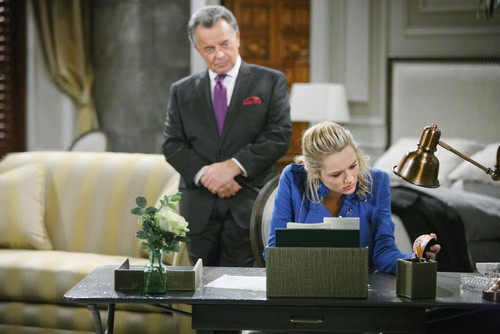 The drama in Genoa City on The Young and the Restless never seems to end. Chelsea may have gotten her son Connor back from Chloe, but Chloe isn’t the only Y&R character who seems to be off their rocker. Tomorrow, Ian Ward will demonstrate just how crazy he is and what he is capable of. Here are your Young and the Restless spoilers for tomorrow, Wednesday, February 26th.

On The Young and the Restless Nikki received the photograph, or selfie, that Ian Ward insisted Summer take with him during their meeting. Ian Ward is a retired cult leader, and very good at persuading people and getting inside their heads and manipulating them. Nikki and Ian have a colorful past, and it was recently revealed that Ian is actually the paternal father of Nikki’s son Dylan. When Nikki was young Ian Ward recruited her into his cult and held her against her will and raped her. Dylan and Nikki obviously want nothing to do with Ian, so he reached out to Summer and is posing as her “life-coach.” Considering how dangerous Ian is, Nikki is probably less than thrilled when she discovers the photos of Summer with him. According to The Young and the Restless spoilers, when Nikki confronts Ian about Summer, he actually turns the tables and blackmails Nikki.

Also on Wednesday, February 26th, Neil and Leslie must face the “moment of truth.” Leslie confessed to Tyler that she has no intention of marrying Neil. But, Neil has given Leslie an ultimatum. He is pressuring Leslie into marrying him, and he threatens that if she doesn’t marry him, then their relationship is over. Tomorrow we will learn whether Leslie chooses to end her relationship with Neil, or caves under his pressure and agrees to the wedding.

What do you think Ian Ward’s angle is? Could he use his connection with Summer as leverage to get Nikki to leave Genoa City with him? If Ian is still half as manipulative as he was when he convinced Nikki to join his cult, then surely Summer would be naïve enough to leave Genoa City with him. Maybe Nikki volunteers to take Summer’s place with Ian Ward to save her granddaughter from the same torture she endured? Leave your theories in the comment section below, and don’t forget to come back to CDL tomorrow for more of The Young and the Restless spoilers.