The Young and the Restless Spoilers: General Hospital, Bold and the Beautiful, Days of Our Lives – Best Soap Death 2014 (POLL)

BY Amanda Austin on December 13, 2014 | Comments: 2 comments
Related : Days of Our Lives, General Hospital, Soap Opera, Spoiler, Television, The Bold and the Beautiful, The Young and the Restless 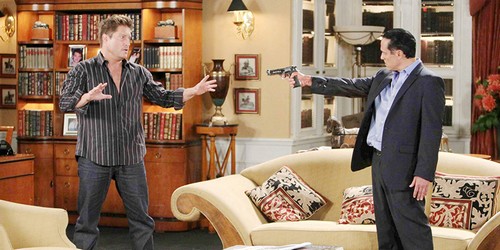 This year is rapidly winding down, and looking back, 2014 was a crazy one for our favorite soap operas: The Young and the Restless, General Hospital, Days of Our Lives, and The Bold and the Beautiful. After reporting all of the major spoilers, news, rumors, and comings and goings for the last twelve months – we decided to make a list of our favorite… and least favorite soap moments of 2014. But, what fun would that be without getting all of our soap fans’ inputs? So, we are going to post a category every day – and let you vote on which moment you think was the best this year. Right before 2014 is officially over we will release all of the results for our readers and you can see which of your favorite and least favorite soap moments made the cut.

Our first category will be “Best Death.” Okay, no death is good – but when it comes to soap opera scenes there are deaths and then there are the “Beast Deaths.” The “Best Death” scenes are the ones that shock you, make you teary-eyed, make you want to give the actors in the scene a standing ovation, and you can tell that over all there was a lot of attention and work put in to the scene. So without further ado, here are our candidates for the “Best Soap Opera Death Of 2014.” Don’t forget to vote in the poll below!

Adam Newman (The Young And The Restless): Adam Newman’s death was by far the most talked about death of the year, but was his actual death really that remarkable? How did his loved ones respond? Was there even a funeral? A lot of fans complained that because TPTB knew Michael Muhney was fired and were hastily filming his exit, it was clear there was not a lot of thought put in to the details of the crash/shooting. (Side note: yes we know Adam Newman is alive now, but that doesn’t mean there wasn’t a “death scene,” so don’t bother writing in the comments below that Adam Newman is alive… we know.)

Hope & Wyatt’s Baby Boy (The Bold And The Beautiful): Believe it or not, there are not a whole of deaths on Bold and the Beautiful, they have the market cornered on weddings, not funerals. But considering the doctor just revealed that Hope lost her baby after her tragic fall down the stairs, and the baby was a boy, we figured we should include it on the list. So, did Kim Matula nail the scenes? Or was it predictable, did you see her unborn child’s death coming a mile away?

Nick Fallon (Days Of Our Lives): Nick Fallons’ death was early on in 2014, and a lot has happened on Days of Our Lives since his demise – but his death stands out to us. Not only did it usher Rafe’s little sister Gabi off the canvas and leave poor little Arianna motherless, but the whodunit storyline had fans guessing for weeks over who killed Nick Fallon. By the end it seemed like there wasn’t a soul in Salem who didn’t have a motive.

Ric Lansing (General Hospital): Yes, we all know Ric Lansing isn’t really dead and is in the witness protection program, but that is what makes his death one of the better ones this year. We all fell for it! Until the next day when Anna unzipped Ric’s body bag and he was just chilling in there like “hey, I’m alive!” And, Ric’s daughter Molly nailed her scenes after learning her father was shot, making the fact that he wasn’t actually dead even more intense!

EJ DiMera (Days Of Our Lives): Ej DiMera’s death didn’t exactly shock us, we knew it was coming six months in advance, down to the very day. Whenever an iconic soap actor like James Scott is killed off – the scene is huge. And, Sami Brady gave her dead husband one hell of a farewell. Did anyone else get chills? Then there is always the fact that EJ’s crazy father Stefano sent his crazy sister Kristen in to the morgue to inject his dead body with some secret serum. But, there is one thing that has always bothered us about EJ’s death scene – and that was who killed him. Who is Clyde to just waltz in to Salem, creep us out, and then shoot a fan favorite character for reasons we don’t even fully understand…and get away with it? EJ’s death would have been better if it was a central character that killed him, with good motive.

AJ Quartermaine (General Hospital): AJ Quartermaine’s death still blows our minds. He was shot trying to prove his innocence, then nearly killed again and again in the hospital, and then just when we thought he was a cockroach and would never die, Patrick lost him during surgery. Then, as if AJ’s death couldn’t get any crazier – he recorded his entire murder and the recording was a central storyline for months to come and eventually landed Sonny Corinthos in prison. Oh, and we can’t forget the crypt sex… literally we can’t forget, it’s burned in our brains.

So go ahead and vote for your favorite “Best Death” in the poll below!