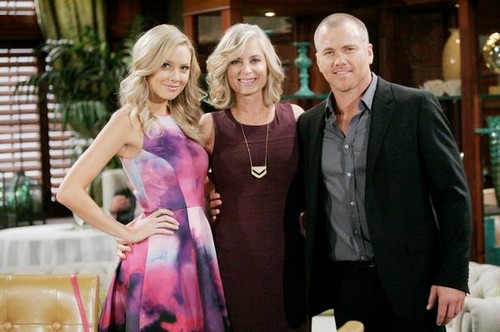 The Young and the Restless spoilers for Monday, September 8 tease an action packed episode for the CBS soap opera. According to our exclusive Y&R spoiler source, Mariah is still determined to cut off her new found mother, Sharon Newman, and wants nothing to do with her.

Mariah heads to the bar where she was previously employed by Nick and turns in her t-shirts and announces she will no longer be working for the Newman Family. However, according to Y&R spoilers, while Mariah is turning in her work uniform, she makes an unexpected ally at the bar. Summer’s hubby, Austin, can relate to Mariah, and after hearing that Ian Ward forced her to marry him, he keeps her embarrassing secret from his own wife and sticks up for Mariah.

The Young and the Restless spoilers for September 8th also reveal that Meredith Baxter will make her big Genoa City debut. After Nikki and Victor have a screaming match over her relationship with Paul, Nikki needs a drink to calm down, so she heads to a dive bar where she doesn’t think any of her friends or family will catch her. While Nikki is ordering a drink, newcomer Maureen approaches her and introduces herself. Y&R rumors have been swirling that Meredith Baxter’s character, Maureen, might be a lesbian and have an affair with Nikki Newman, and that is definitely a possibility, because it almost seems like Maureen is hitting on her at the bar.

Paul Williams begins investigating Ian Ward’s disappearance. After receiving Nikki’s 911 call, Paul headed to the Newman Mansion, and found sets of bloody footprints in her driveway. Paul receives a tip for the Royal Canadian Mounted Police (Canada’s version of the FBI) claiming that Ian Ward might have crossed over the border in to Canada, but Paul isn’t convinced that something much worse didn’t happen to the villain.

So, Y&R fans, what do you think about Austin and Mariah bonding? They actually have a lot in common if you think about it. Do you see them building a friendship, or possibly even more than a friendship? And, what about Nikki and Maureen, did you watch the scene where they meet in the bar? Do you think Maureen is hitting on Nikki? Let us know what you think in the comments below, and don’t forget to check CDL tomorrow for more YR spoilers.