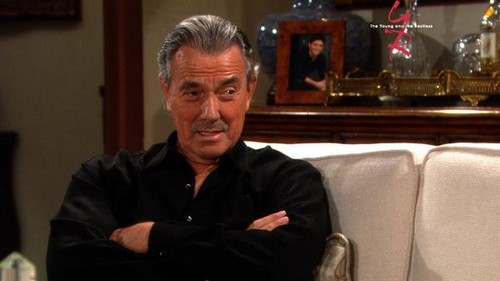 The Young and the Restless spoilers have been teasing Michael Baldwin’s health issues for over a month now. CDL exclusively revealed several weeks ago that there was a good possibility Jill Farren Phelps was killing off the character with cancer, and all the signs are pointing to Michael Baldwin’s demise. According to Y&R spoilers for Friday October 17, Michael meets a psychic who shakes his hand and is visibly shaken by what she sees in his future. The psychic warns Baldwin to , “take care of himself.” After his haunting run-in with the psychic, Michael receives a phone call from his doctor telling him he needs to come in to his office for an urgent meeting.

The Young and the Restless spoilers reveal that on the October 17 episode of the CBS soap opera Victor Newman pays Phyllis a visit at Jack’s house. Jack is appalled when Victor confesses that he visited Phyllis while she was in a coma and had the doctor give her experimental medication to wake her up. Victor insists he did it all for Summer, who needed her mother in her life. However, Victor reveals he has ulterior motives when Jack leaves the room and the old schemer continues his quest to unveil Sharon’s secret.

Paul and Nikki are determined to catch Ian Ward alive so they can clear Dylan’s name. However, Nikki’s recent drinking binge could jeopardize their entire plan. Y&R spoilers tease Maureen blows up Nikki and Paul’s cover and exposes Nikki’s secret all in one full swoop. And, on October 17 Y&R fans can also expect to see Victoria and Stitch grow closer as he surprises her at work and lays another steamy kiss on her.

So Y&R fans, do you think that Michael Baldwin has cancer, or is this all a publicity gimmick to bring in ratings? Will JFP really kill him off? Does Phyllis know Sharon’s secret, or has Victor Newman hit another dead end on his mission to expose his future daughter-in-law? Let us know what you think in the comments below and don’t forget to check CDL tomorrow for more The Young and the Restless spoilers.