The Young and the Restless Spoilers: Stitch Confessed To Murder To Save Maureen – Christine Disgusted Paul’s Protecting Dylan 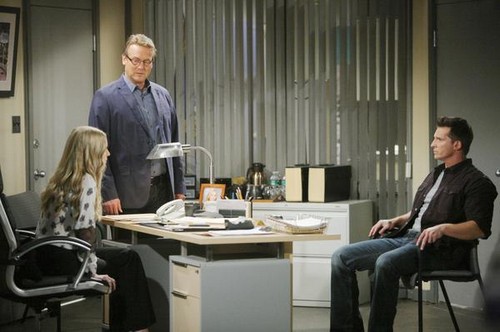 When The Young and the Restless spoilers revealed that the new character Maureen was a troublemaker, and related to some of the residents of Genoa City, Y&R fans’ imaginations began to run wild. Once it was confirmed that Maureen was indeed the mother of Stitch and Kelly, a popular theory among fans was that Maureen may actually be responsible for Stitch’s dad’s death, and Stitch confessed to the murder to cover up for her. Well, according to The Young and the Restless spoilers for Thursday, September 25th, that theory may actually be true.

CDL’s The Young and the Restless exclusive spoilers source reveals for Thursday, September 25 that Stitch tries to tell Victoria something important about himself that he thinks she “deserves to know.” Right before Stitch is able to spit out his new secret, his mother Maureen arrives and interrupts. After Victoria leaves, Maureen scolds Stitch and says she knows he was about to tell Victoria the truth. She reassures her son that Victoria still loves him, and he doesn’t need to tell her the truth.

When Stitch’s last secret was revealed, we learned that his father was an abusive drunk and passed out in a garage that went up in flames and Stitch’s confessed to the murder and went to jail, although he maintains his innocence. Judging from Maureen and Stitch’s new mysterious secret, there is a legitimate chance that Maureen really is the one who killed Stitch’s father and he covered for her. What else could their secret be?

The Young and the Restless spoilers also reveal that on September 25 Y&R fans can expect to see Christine learn that Paul has been covering up for Dylan and never even had the mud on his shoes tested, and is becomes clear that Paul thinks his son really did murder Ian Ward. Chelsea and Billy also continue to grow closer, despite Jill’s obvious disapproval and Lauren gushes to anyone who will listen that she and Michael finally did the deed.

So, Y&R fans, do you think that Stitch may have confessed to his father’s murder to cover up for his own mom Maureen? What secret could they possibly be discussing? And, what about Dylan, did he kill Ian Ward? Or is Ian Ward still alive and well and framing Dylan? Let us know what you think in the comments below and don’t forget to check CDL tomorrow for more The Young and the Restless spoilers.