The Young and the Restless Spoilers: Phyllis Newman is Waking Up – Sharon Travels To See Her Victim – Devon Dates Abby? 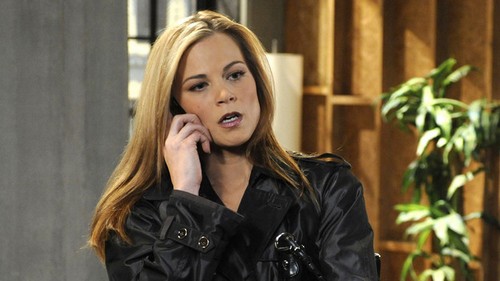 Adam Newman’s infamous hand scenes haven’t appeared on The Young and the Restless in a few weeks, it looks like Phyllis Newman’s hands have stolen the show. Phyllis Newman has been in a coma since 2013, but The Young and the Restless spoilers recently revealed the character would be returning and soap opera star Gina Tognoni had been cast to play the iconic character. Tognoni’s air date is scheduled for Monday, August 11th.

According to CDL’s exclusive The Young and the Restless spoiler source, on the July 30th episode of the CBS soap opera, Phyllis Newman’s hands will make another appearance. The last time Summer Newman visited her mother, one of her fingers moved but Summer didn’t notice. Y&R spoilers reveal that on July 30th a scene of Phyllis in bed will appear, and this time she will move all of her fingers.

It’s ironic because Victor Newman is currently scheming to wake Phyllis up from her coma, so that he can get some information from her. He has even brought in a coma specialist, Dr. Hans Cutler to bring Phyllis out of her deep sleep. And, he is jumping through hoops and shoveling out a lot of money to get Dr. Cutler to wake Phyllis up without her family’s consent. Victor might be going through all of this trouble for nothing though, because it looks like Phyllis Newman is already waking up!

The Young and the Restless spoilers for the July 30th episode also tease that fans can expect to see Mariah and Summer bumping heads, Sharon making plans to travel to Georgia to see Phyllis, and Devon makes a shocking move and asks Abby out on a date despite his obsession with Hilary.

So Y&R fans, are you as excited as we are that Phyllis Newman is waking up from her coma? Do you think that when she wakes up she will actually remember Sharon’s secret, or do you think she will have as much trouble as Sharon is remembering her secret? Let us know what you think in the comments below and don’t forget to check CDL tomorrow for more The Young and the Restless spoilers.