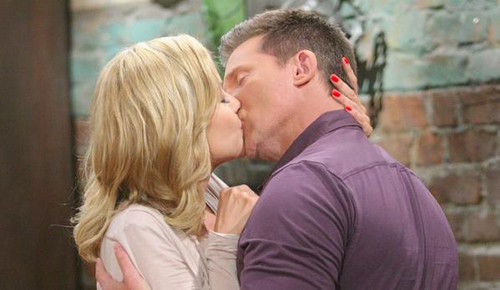 The Young and the Restless spoilers reveal that Tuesday December 16 will be another dramatic day in Genoa City, Y&R rumors tease that fans will not want to miss tomorrow’s episode of the CBS soap. Dylan recently proposed to long-time girlfriend Avery in an adorable scene on Y&R, and she accepted. But, did he do it for the wrong reason? Avery’s ex Joe seems to think so.

The Young and the Restless spoilers tease that on December 16 Joe will pay Avery a visit at her office and inform her that she is making a huge mistake marrying Dylan – and the only reason he decided to pop the question now is because he feels threatened by her ex-husband. According to Y&R spoilers, while Joe is visiting Avery, Dylan will be busy giving Sharon a pep talk and encouraging her to go back to Jabot and get her job back for the sake of her daughter Faith.

In other The Young and the Restless news, Michael Baldwin’s wife Lauren has accepted the fact that he has Stage 3 prostate cancer and is ready to tackle the disease head on, however Michael isn’t interested in treatment. After spending the day together at the doctor’s office going over possible treatment plans, Michael refuses to sit down with Lauren and decide on a course of action. Unfortunately, time is not on the lawyer’s side – and if he doesn’t choose a treatment plan soon, it could be too late.

The Young and the Restless spoilers for December 16th also reveal that Kelly and Jack will have another heated confrontation, Joe Clark and Kelly will begin planning a party to celebrate his business deal, and Avery will pay Phyllis and Jack a visit to tell them about her engagement to Dylan. So Y&R fans, what do you think of Joe Clark? Is there a woman in Genoa City that can stand to be in the same room with him? He seems to be rubbing Avery, Lily, and Kelly all the wrong way. Will Michael get help before it is too late? Do you think that Dylan proposed to Kelly just because Joe came to town? Let us know what you think in the comments below and don’t forget to check CDL tomorrow for more The Young and the Restless spoilers and news.