The Young and the Restless Spoilers: Faith Runs Away From Home, Jack Realizes Adam Is Alive, Fen Learns Michael Has Cancer 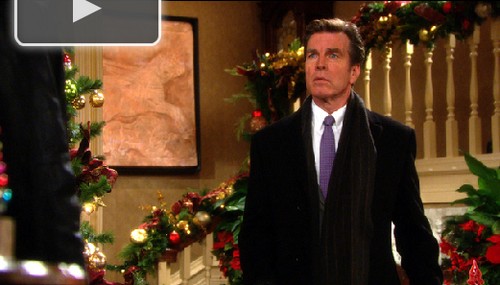 According to Y&R spoilers for Friday’s episode of the CBS soap, Adam Newman is not dreaming – he is really standing in Jack Abbott’s house. At first Jack believes it is one of Victor Newman’s scam, but eventually Adam proves who he really is by repeating to Jack the last thing he said to him and telling him details of Skye’s death that only Adam would know. The Young and the Restless spoilers tease that Adam fills Jack in on how he wound up with Gabriel’s identity, and who Sage is. Despite Adam’s pleas that Deliah’s hit and run was an accident, Jack announces he is calling his brother Billy and telling him Adam is alive.

In other The Young and the Restless news, Michael’s secret is finally out – Kevin slips up and reveals to Michael and Lauren’s son Fen that his father has cancer. Sadly, while Fen is learning the devastating news, Lauren and Michael are bickering – he still will not commit to a treatment plan and now he wants a third doctor’s opinion. Meanwhile across town Nick Newman has tough day with his daughter Faith, who is not happy that her parents are not getting married, and as soon as he turns his back – his and Sharon’s young daughter runs away and is nowhere to be found.

So Y&R fans, do you think that Jack will blow Adam’s cover and tell Billy he is alive? Or will Adam blackmail him with the Skye ordeal so Jack has no choice but to keep quiet? Do you think Michael is making a mistake shopping around for a doctor’s diagnosis he likes when he should be getting treatment? Where did Faith run away to? Let us know what you think in the comments below and don’t forget to check CDL tomorrow for more The Young and the Restless spoilers and news.