The Young and the Restless Spoilers: Adam Newman Reveals His Identity to Jack – The Gabriel Cover Blown! 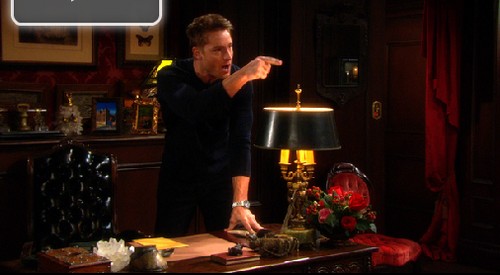 The Young and the Restless spoilers for the Thursday, December 18 episode of the CBS soap tease some exciting developments in the Adam Newman storyline. Since Adam Newman faked his death and stole a man named Gabriel’s identity – he has been creeping around Genoa City and checking in on his family, and with his new face they had absolutely no idea the stranger was the not-so-dead Adam Newman. According to The Young and the Restless spoilers for Thursday’s episode – Adam AKA Gabriel will finally reveal who he really is to someone in Genoa City!

The Young And The Restless spoilers tease that on December 18 Sage has a heated conversation with Gabriel, she fears he is becoming delusional and will blow his cover, and reminds him that Adam Newman killed an innocent little girl (Deliah) and no one is going to forget about it any time soon. Adam informs her that he is going to make Chelsea fall in love with Gabriel Bingham – and then reveal his true identity. After’s Adam’s heated conversation with Sage, spoilers tease that he heads to Jack Abbott’s house. When Jack arrives at home and finds the stranger standing in his house, he threatens to call the police…and then Gabriel announces that he is actually Adam Newman.

In other The Young and the Restless news, on December 18 Y&R fans cans expect to see Stitch and Victoria playing house with baby Katie – and Billy decides to bury the hatchet with his rival Stitch. Across town, Mariah and Noah try to talk some sense in tot Nick Newman regarding his custody case with Sharon, and Fen invites Summer and Austin on a ski trip with him.

So, Y&R fans, are you as shocked as we are that Adam just told Jack who he really is? Do you think that it could be a dream, or the real deal? Will Jack keep his secret and help him? Or will he turn him in to the Genoa City police? How long will Victoria, Stitch, Billy, and Chelsea be able to maintain their blissful co-parenting? Is Nick going too far with the custody case – or should he take Faith from Sharon? Let us know what you think in the comments below and don’t forget to check CDL tomorrow for more The Young and the Restless spoilers and news.