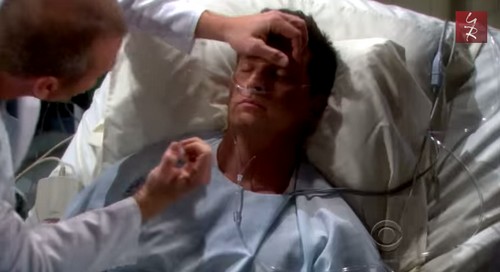 According to The Young and the Restless spoilers for the week of June 30th, Ian Ward will continue scheming to take down Nikki and the rest of the Newman family. The cat may be out of the bag, and Nikki and Dylan know that he is not Dylan’s father, but that doesn’t mean he doesn’t have any other tricks up his sleeve.

When Paul was hanging in there by a thread, and desperately in need of a transplant, Leslie decided to breach the confidentiality agreement she had with her client Ian Ward and tell Nikki Newman that there was no way Ian Ward could be Paul’s father. Generally, Leslie plays it by the book, but she couldn’t stand by and watch Paul die, knowing that his son Dylan was standing right there.

According to Y&R spoilers in the July 7th edition of Soap Opera Digest, Leslie’s good deed will not go unpunished. Ian Ward has lost a lot of leverage now that everyone knows Dylan is not his son, but during the week of June 30th he reveals his new plan. Y&R spoilers tease that Ian takes Leslie aside and warns her that he knows she breached their attorney-client confidentiality, and if Leslie doesn’t represent him and help him sue Nikki Newman, he will take her to the ethics board and have her license to practice law taken away.

Obviously, Leslie is stuck between a rock and a hard place. The last thing she wants is to lose her license to practice law. But, she isn’t exactly thrilled about helping Ian file a bogus lawsuit against Nikki claiming that she caused him emotional stress and damage by lying about Dylan’s paternity. What do you think Leslie should do? Should she take her chances with the ethics board or go through with Ian’s lawsuit against Nikki? Let us know what you think in the comments below and don’t forget to check CDL tomorrow for more The Young and the Restless spoilers.