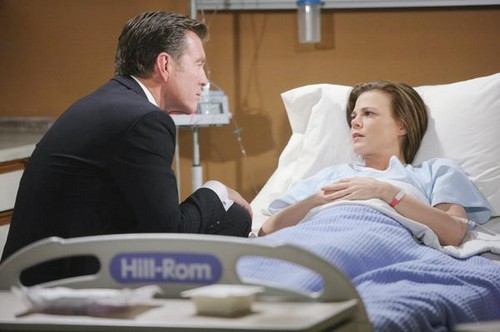 The Young and the Restless spoilers for October 9 focus on the love triangle between Jack, Kelly, and Phyllis. Y&R fans were sure that when Phyllis awoke form her coma and returned to Genoa City, she and Jack would reconnect and Kelly would be kicked to the curb. The fact that Jack promised his and Phyllis’s daughter Summer that if Phyllis woke up he would be with her in a heartbeat was a pretty good indicator of the future.

According to CDL’s exclusive The Young and the Restless spoilers source on Thursday October 9 Jack may not be in as quick a hurry to leave Kelly as we all expected. Even Kelly was sure their relationship was over with Phyllis back in the picture, she packed her bags to move out of the Abbott house. But, according to Y&R spoilers on October 9th Jack takes Kelly and all of us by surprise and leaves Phyllis’s hospital room to go home and make love to his fiancée Kelly. Perhaps he won’t be reconciling with Phyllis as soon as we all thought.

The Young and the Restless spoilers reveal that while Jack is busy with Kelly on October 9th, Phyllis will be entertaining visitor in her hospital room. Sharon pays Phyllis an awkward visit, and tries to get Phyllis to come clean about the secret she can’t remember. Y&R spoilers tease that Phyllis isn’t read to drop the bomb on Sharon and Nick quite yet, and insists she has no idea what secret Sharon is referring to.

Hilary and Devon have been carrying on quite a sordid affair behind Neil’s back. But, like every soap opera affair, eventually it will be exposed. Y&R spoilers tease that Lily is determined to find out what woman he had in his room with him. While Lily is snooping around Genoa City looking for answers about her brother’s lover, Devon decides to gas up the jet and pay Hilary a visit in New York City.

So Y&R fans, are you shocked that Jack is still sleeping with Kelly? Do you think he will choose her over Phyllis, or is it just a matter of time before he and Phyllis wind up back together? Is he going to bring Phyllis home and live with Kelly and Phyllis? Let us know what you think in the comments below and don’t forget to check CDL tomorrow for more The Young and the Restless spoilers.