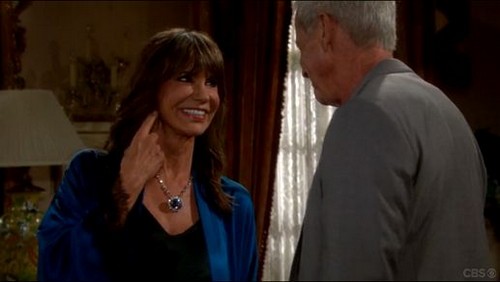 The Young and the Restless fans have been watching Jill and Colin’s diamond necklace story develop over the course of the last few months. The audience have known for months now that Colin owed a serious debt, and has been using Jill to try to get his hands on some cash. Jill eventually caught on and even locked Colin up in the attic for a few days. While the pair was bickering they finally found the multi-million dollar necklace Jill’s mother had stashed in a lamp for safe keeping. Colin tried to arrange to have the necklace stolen from Jill, but she refused to take it off.

According to our exclusive CDL The Young and the Restless spoiler source, on July 1 Jill will make a surprising move. After all of the drama that she has gone through with Colin over her family jewels, she simply hands the necklace over to him when he receives a phone call from the man he owes money to, and he threatens Colin’s family.

On the June 30th episode of Y&R, Kelly confirmed what fans had suspected for weeks, and revealed to Jack that Stitch is actually her brother. Although, she didn’t let Stitch’s secret out, she may not have to. Chelsea is determined to help Billy win Victoria back, and she is closing in on Stitch. According to spoilers for the July 1st episode of The Young and the Restless, Chelsea and Kevin make a shocking discovery on the internet and learn that Ben Rayburn is actually dead, and Stitch has been hiding behind a fake name since he arrived in Genoa City.

So Y&R fans, are you as shocked as we are that after months of drama between Jill and Colin and the necklace they finally found, that Jill just handed it over? And, we still have no idea what Stitch is hiding, what are your theories? Let us know in the comment section below and don’t forget to check CDL daily for more The Young and the Restless spoilers.