The Young and the Restless Spoilers: Sharon and Nicholas Panic – Faith Newman Rescued By Uncle Adam as Gabriel! 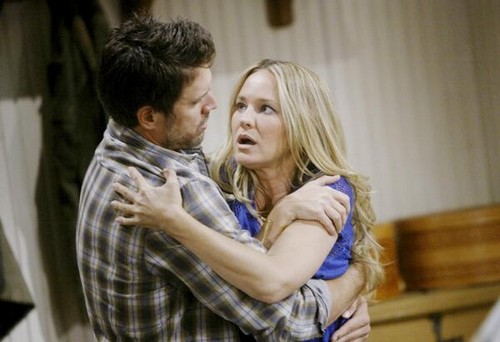 The Young and the Restless spoilers and casting news is reporting that one of the youngest residents of Genoa City will be flip-flopping roles again. Faith Newman, the youngest daughter of Sharon and Nicholas Newman, will be recast with a familiar actress. McKenna Grace will change places with Aly Lind once again as the girls work on other projects. Grace portrayed Faith Newman earlier this year until she received a casting call to star on another show. Now it’s Lind’s turn to work on a new project. Watch for McKenna’s first air date on The Young and the Restless at the end of December.

Speaking of little Faith Newman, the latest The Young and the Restless spoilers tease that a distraught Faith, upset that her parents Nick and Sharon Newman did not get married, plans on running away from home. We have been watching Faith painfully come to terms with her parents separation and fight for full custody . The newest rumors disclose of  how Faith takes off from the Newman family compound and gets herself entangled with a new, but familiar character.

The Y&R spoilers are indicating that when an all out alert is sound to find a missing Faith Newman, her Uncle Adam Newman comes to her rescue. Ironic that once Adam stole the newborn Faith from her mother Sharon’s arms and now becomes her hero! By saving Sharon and Nick’s little girl will Adam be able to prove himself in the eyes of his family? Will Gabriel, aka Adam, finally reveal his true identity to the residents of Genoa City? If so, will his heroic action lead Adam to finally be considered one of the good guys in Geona city? Adams return to the Young and Restless has been very eventful and entertaining so far. Keep tuned to Y&R as the drama unfolds about his true identity and how his return effects the residents’ of GC. Come back to The Young and the Restless spoilers tomorrow so you can enjoy our latest and greatest posts!