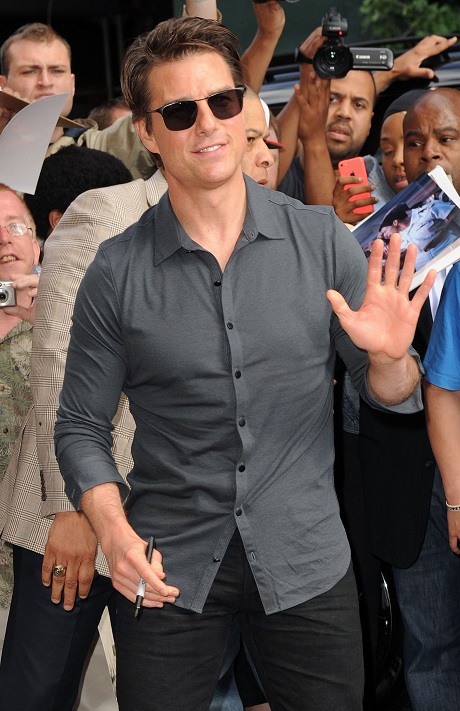 Poor Tom Cruise. He works so, so hard, and it so rarely pays off. I guess that’s what happens when you ‘out’ yourself as a Scientology loonie, despite your considerable talent and dedication to your craft. He’s lost his status as the country’s biggest movie star, not to mention his marriage, thanks to Scientology. And according to reports, he’s desperate for an image re-haul, which includes a new wife and a new baby.

Life & Style claims that Tom is ‘unfulfilled’ in his life, especially with the lack of personal accomplishments. A source tells Life & Style, “Professionally, he’s accomplished pretty much everything he set out to do, but to fulfill himself personally, he wants a new bride and a new child. The actor is asking friends, family and Church of Scientology members to be on the lookout for the fourth Mrs. Cruise.”

Has he really accomplished ‘everything’ he wanted to do professionally? The guy hasn’t even won an Oscar, and his career seems to be going down the dump these days. Edge of Tomorrow didn’t even crack $40 million during the opening weekend, and that was actually one of the best reviewed of Tom’s recent films! You’d think that Tom would be focusing on that, not getting a wife and baby.

Perhaps he thinks that getting a new family will fix his image problems? After all, people still associate him with Katie Holmes and Suri Cruise, even though he barely seems to be in touch with them right now. Maybe he believes that getting a new family will bring back the public’s good will, and he might not be completely off in that regard. The public loves nothing more than a good comeback story, but for that to happen, Tommy will somehow have to cut ties with Scientology – and I’m sorry, but I just don’t see that happening.