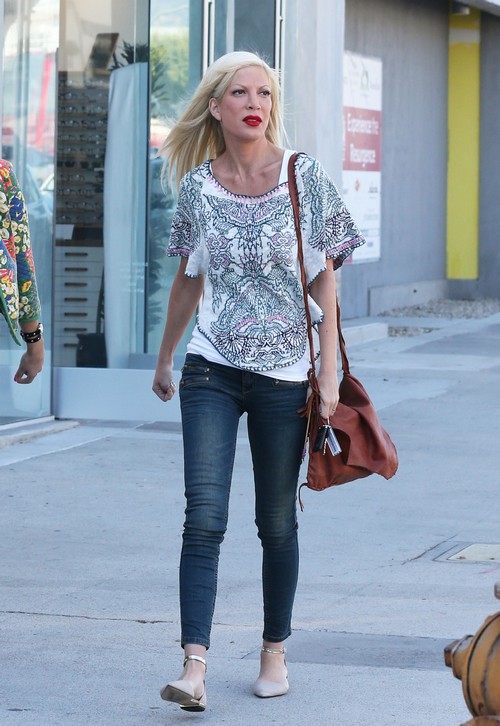 If viewers are to believe everything Tori Spelling and Dean McDermott are feeding us, you’d accept that Tori has spent the last week in the hospital over marital drama that you’ve seen unfold on her docu-series True Tori. Too bad CDLers know better and recognize Tori and Dean’s scam for what it is.

Considering they are announcing future episodes, we know “True Tori” has already spilled her marriage secrets for the cameras with heart-wrenching lines such as, “I was so mad.” Yes, really deep, genuine feelings from a woman who just had her heart ripped out right? Now, E! Online reports that Tori has spent the past six days in the hospital for undisclosed health issues. Reports are saying that it is a result of her marriage woes that viewers are seeing played out for the cameras. We think not. Perhaps Tori’s alleged drug abuse is at the center of her health issues. A six day hospital stay is not common unless there is something more seriously wrong… or if a drugged-out celeb needs rehab.

Many media sources have reported Tori has been abusing pain killers to deal with her issues with Dean. Tori, however, has been abusing pain pills to numb the pain from losing her father, her disintegrating relationship with her mother, and her financial problems. The cheating scandal that CDL first reported as being fake, is now being widely reported as such and viewers are beginning to see that Tori and Dean have been pulling the wool over their eyes throughout the entire reported affair just so Tori and Dean could try to recover from their many financial losses.

Tori’s drug abuse began long ago, but now as her story on True Tori is being scrutinized and many are calling her out about making up the entire scandal, she went off the rails. Tori is detoxing now, with Dean’s help, and they will resume their life of lies. Dean was said to be by Tori’s side at the hospital almost the entire time. Hopefully Tori will get the help she needs, but don’t believe she is in the hospital for other health reasons, or due to her marital woes. We all know better!