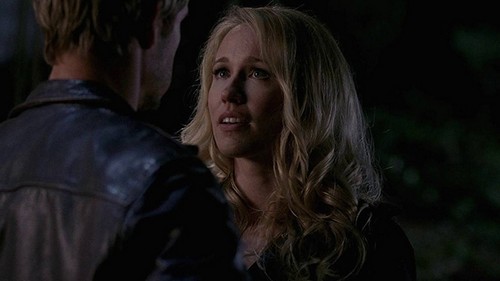 True Blood was back tonight and it was all kinds of intense, the best part of the evening for me was that Bill and Sookie are back together.  Also Eric made a deal to be the spokesperson of Mr. Gus’ nuBlood which they would make from Sarah Newlin’s blood.  So much more happened and if you are like me and you are anxiously awaiting each episode, we have managed to get our hands on a sneak peek video and some spoilers to whet your appetite for next week’s episode 8 called “Almost Home.”  So sink your fangs in and enjoy!

On tonight’s episode Eric, Pam and Mr. Gus (Will Yun Lee) closed in on Sarah Newlin in Dallas. Adilyn  and Wade find a temporary haven, and unexpected hospitality with Violet.. Refusing to accept the inevitable, a desperate Sookie turned to her grandpa Niall in search of a miracle for Bill. Bill recalled the inexorable forces that led him to his marriage 170 years earlier.  Hoyt resurfaced in Bon Temps. Sam faces a quandary, to move or not to move. And lot’s more happened — did you watch the episode? If you missed it we have a full and detailed recap, right here for you.

Spoiler alert: If you’re one of those people who doesn’t like spoilers, stop reading now! We have some juicy spoilers for you about the season 7 episode 8 of HBO’s “True Blood.”

Official HBO synopsis of next week’s episode: “With his prey in sight, Eric reconsiders his end-game strategies against Sarah. Sookie puts her life at risk in hopes of saving Bill. Lettie Mae (Adina Porter) and Lafayette (Nelsan Ellis) urge Reverend Daniels (Gregg Daniel) to join them in their V-fueled search for Tara (Rutina Wesley). Violet (Karolina Wydra) eyes payback against those who betrayed her, while an old love is reborn for others.”

On next week’s episode it looks like Sarah Newlin is still on the loose.  The end is near for Sarah and Bill. Lettie May and Lafayette try to convince her husband that they have to find out what Tara is trying to tell them.  Jessica feels that Adilyn is in danger but somehow gets caught by Violet who has her tied up.  Violet is not pleased because Jason wants Jessica.

True Blood episode 8, “Almost Home” airs on HBO on August 10th, 2014.   Check out the preview video below of episode 7 below and let us know in the comments below what you think!  Are you enjoying season 7 of True Blood?  I am loving it and next week’s episode is going to be so intense! Make sure to check out the preview clip below!