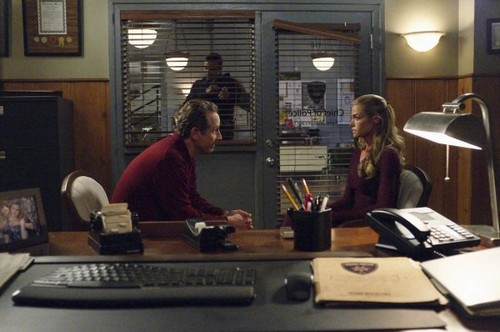 ABC Family’s popular new show Twisted returns tonight for another great episode called, “The Tale of Two Confessions.”  On tonight’s episode in the first-season finale, Kyle’s investigation takes a new turn. Meanwhile, Whitney’s mom arrives to take her daughter back to the city; the romantic triangle among Danny, Jo and Charlie culminates; and additional secrets of Vikram’s are unearthed.

On last week’s episode with his guilty conscience becoming too much to bear, Danny was determined to uncover the truth about who was responsible for covering up the murder and visits an old confidant for some valuable insight. Jo’s own sense of guilt led her to question the motives of a friend. Lacey tried to be a good friend to Whitney while struggling to define their complex new relationship. Tess received some devastating news as she and Kyle tried to move on with their lives. The episode, titled “Danny, Interrupted,” was written by Stacy Rukeyser and directed by Executive Producer Gavin Polone.

On tonight’s episode Kyle’s investigation culminates with a series of shocking and contradictory confessions and potentially deadly consequences. The complicated triangle between Jo, Danny and Charlie comes to a shocking head. Karen and Tess uncover more of Vikram’s secrets, including a piece of evidence that has major implications for Tess and the Masterson family. Meanwhile, Whitney’s mother Gretchen (Elaine Hendrix) shows up to bring her daughter back to the city, and her candor about Whitney’s past causes Lacey to question her friend. And Rico makes a major faux pas in his first meeting with Andie’s parents. The season one finale episode was written by Charles Pratt, Jr. and directed by Executive Producer Gavin Polone.

The parents are furious and they have every right to be. Karen didn’t want her son to confess. She even visited Jack in prison to make sure her precious Danny would be safe. Karen didn’t want Jack to say anything and he didn’t, but it was not because he was willing to take the fall. All along Jack had faith that Danny would do the right thing by turning himself in.

And that faith was rewarded – Danny did turn himself in although he tried to protect Jo by leaving her out of his confession. Not that it did much good seeing as Tess dragged her daughter down to the police station to admit to being with Danny the night Vikram died. Though Jo’s mom soon regretted her hasty actions.

Tess was hoping her husband could keep it in the family and instead he chose to do his job as the Police Chief. Kyle got another officer to take Jo’s confession while he went about investigating their story. Which turns out to be harder than he thought – whoever covered up the crime did a really great job. There was no proof of a fight at the church or at the bottom of the ravine of there ever having been a body.

Kyle also took the time to speak to Charlie and the weirdo confessed to witnessing Vikram’s death however he added his own spin to it. And for all his faults, Kyle wisely chose not to believe him and even warns the kid to stay away from his daughter.

Because there wasn’t any proof to corroborate Danny and Jo’s story – they were released into their parents’ care. So they’re out and about and none of their friends know what’s going on. All they do know is that both Danny and Jo confessed to something and it’s still not doing Jack any good because he remains under suspicions until hopefully the kids’ stories pan out. Which also happens to leave his daughter, Whitney, at the mercy of her mother.

Whitney was with everyone while they were speculating about Danny and Jo when her mother decided to intrude. It seems the other woman could hardly wait to tell Whitney that she’s coming back home with her. When the real question is why? There isn’t any love lost between these two and her mother kind of comes of like she hates her own daughter.

Whitney doesn’t have a good enough excuse to put her off. Her dad is in jail and it’s not like she can stay with Lacey forever. Never mind that their bi-curious flirtation didn’t work out, but there was no way that Whitney’s mom was going to allow her to stay with strangers over family.

Family is important and that’s why when someone is invited to say… a family dinner then it would have been really smart if they remembered to attend it. Andie invited Rico to dinner with her parents and he completely forgot. He was comforting Jo after hearing about all she’s been through and by time he realized his mistake it was too late. Rico arrived at the restaurant just when they were leaving and he made situation worse by explaining he was comforting a friend that recently came out of prison. Andie’s parents were strict enough, but now they’ll never trust their daughter around a guy they presume Rico to be.

Lacey was able to speak to Jo and Danny at school. She wanted to know if they were ok and yet she didn’t like what she saw. Lacey noticed how close they’ve gotten and it made her uncomfortable. So she quickly made an excuse about being there for Whitney and fled.

Lacey heard from Whitney why she left her mom’s to begin with and then she tried to be a good friend by speaking to Whitney’s mom on her behalf. She attempted to get the adult in this situation to see how much her child was scared at the thought of returning home to be with her mom and the mom’s sleazy boyfriend, but all she got in return was some pretty hard truths about Whitney. Whitney lied about only being with girls and why she was kicked out of her last school. The mom says that’s just something her daughter does. She claims Whitney is a habitual liar and later Whitney admitted to that part of herself.

Lacy was mad at her for lying and Whitney tried to defend herself by saying she’s not like that anymore. Her dad was released from prison and he made her mom change her mind on moving Whitney so the teenager gets to stay. Now if only she had back her friend to cheer with!

Lacey wasn’t the only person that noticed the new closeness between Danny and Jo – Charlie has been following Jo around. He saw how much they meant to each other and decided to kidnap Jo rather than let her be happy with someone else.

She was supposed to meet up with Danny when she never showed. That got him worried enough to start looking for her and if it wasn’t for Lacey then he would never have found Jo. Lacey’s friend app helped them trace Jo’s location to where Charlie was holding her.

They arrived on the scene the same time Jack and his daughter were plotting over at his house. Jack worked his way back into Karen’s good graces when she was right all along to be weary of him. Jack and Whitney were working with Charlie from the beginning and they dropped him once he went rogue.

They’re in this for the money while Charlie was only ever in this for revenge. His mother was Danny’s Aunt Tara. You know the one everyone thought Danny killed and that’s why Charlie made sure to steal a car and go to the same juvenile facility as Danny. He was planning to kill Danny when he got there, but when he learned it was Vikram that actually killed his mom; his plan changed and somehow that involved Jack and Whitney.

Tess and Kyle arrived in time to see Charlie holding a knife on their daughter. Kyle had drawn his gun but his wife begged him not to shoot. She found out what happened to her baby and SURPRISE(!!!) it wasn’t a girl- Vikram had given her son to Tara and now Charlie is holding his sister hostage.

Tess revealed the truth hoping it would make Charlie put down his knife. Yet a gun still went off and we won’t know if anyone was hit until the show returns for season 2!