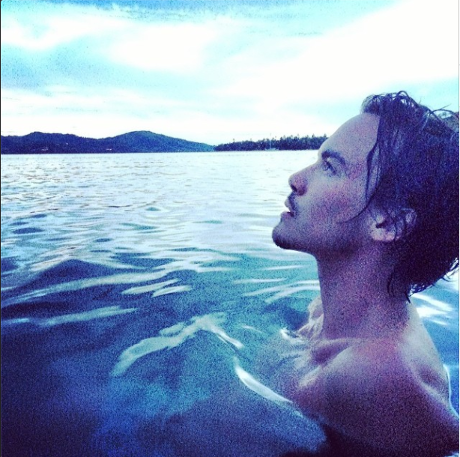 Tyler Blackburn, who’s best known for his work on Pretty Little Liars and most recently the supernatural spin-off Ravenswood, decided to show off quite a bit of himself on his Instagram recently. The actor is currently on a vacay in Fiji and is using social media to document every aspect of his trip — and we mean every aspect, including his skinny dips, which revealed his naked butt for the world to see. There must be something in the water these days that’s encouraging celebs, of all walks of life, to get a bit cheeky on their Instas.

The actor posted several pics on the popular photo sharing site to document his journey, including one of him doing an epic handstand, one of him sleeping on the airplane, one of him drinking a bottle (of something), and another one of him wading in the water while looking all mysterious and contemplative (above).

Check out the pictures below (the “Tyler Blackburn bare butt” has been cropped slightly — you can view the full on on Tyler’s Instagram) and let us know if you were surprised to hear that this ABC Family star dared to take a walk on the wild side — and show it off to the world!

If he would’ve released a photo like this several weeks ago, we might’ve said that its purpose was to drum up some publicity for his show Ravenswood. But, being that the show recently ended its first season, well, it seems as if there’s no great motivation behind these pics other than him wanting to show the Internet his rear!