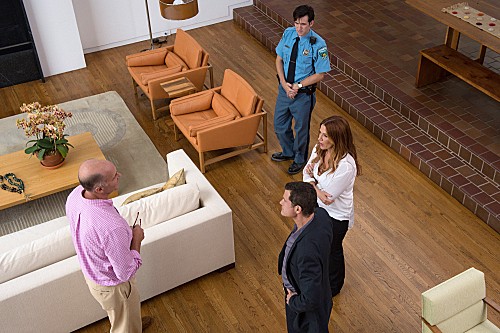 Tonight on CBS UNFORGETTABLE continues with a new episode called, “East of Islip.”  Carrie and Al stay at Eliot’s Hamptons beach house and they help with a local investigation.

On last week’s episode when a defense attorney was killed, Carrie (Poppy Montgomery) and Al (Dylan Walsh) hunted for a recently paroled criminal who may have been looking to settle other scores.  Did you watch last week’s episode?  If you missed it we have a full and detailed recap, right here for you.

On tonight’s episode Eliot lets Carrie and Al stay in his Hamptons beach house in exchange for help with a local murder investigation. The probe proves to be a challenge due to the tight-knit community’s refusal to give up its secrets.

Tonight’s episode 11 looks like it going to be great and you won’t want to miss it. So be sure to tune in for our live coverage of CBS’s Unforgettable episode 11— tonight at 9 PM EST! While you wait for our recap let us know how much you are enjoying this season of Unforgettable?

AL and Carrie weren’t even afforded the right amount of time to get excited about a paid vacation before they realized Elliot was actually sending them to the Hamptons just so they can go hunt a serial killer.

The serial killer has been killing women in the area for the past decade and he usually leaves their body to wash up on shore (as part of the theatrics). So when a young woman by the name of Shelly Branigan washed on the private beach of a very wealthy and political influential man. Namely the Mayor – Elliot ended up getting called and he in turn put his best people on the case.

Although he happened to mention the case and where Carrie and Al were going in front of the whole squad room. A decision he’s bound to regret seeing as his agents were soon joined by Jo, Jay, and Cherie.

They wanted to enjoy Elliot’s “small” weekend cabin as well, but Al did at least make sure they worked for this vacation. Jo, herself, thought she’d be a huge asset to a small town coroner’s office and surprisingly Dr. Bloom wasn’t the country bumpkin she was presuming he would be.

He was more than capable of handling Shelly’s autopsy on his own. After all he did perform autopsies for two of the serial killer’s victims. And that’s why he’s knows for sure that Shelly wasn’t killed by the residential serial killer – the MOs don’t match!

Shelly was stabbed by a small knife while other victims were all strangled. But Shelly’s killer wasn’t trying pass her off as a victim of a serial killer. Dr. Bloom and Jo found evidence of someone trying to tie her to an anchor. If she had stayed tied then her body might have never been discovered.

She was though and now the mystery is who would killer a blue collar girl from Islip in the wealthier parts of the Hamptons?

The answer to the location is easy – Shelly had found work nearby. Her father was in an accident and her family was struggling financially. So she found a job as a waitress. Carrie and Al had thought that maybe her possible second job was what put her in harm’s way but they were wrong seeing as there isn’t a job in the world that would have paid her a one shot of 10 grand.

So they then looked into Shelly’s lifestyle – just to see if she was as squeaky clean as her parents thought she was. And apparently she wasn’t. Because what was a townie doing at one of the premier social events of the year?

Shelly had attended the engagement party of Travis Harrington and Lizzy Mortimer. Lizzy was the pampered daughter of the George Mortimer. He was old money and his family was more connected than the Bushes.

The specially ordered food at the party was the last thing Shelly had eaten so Carrie and Al know she died sometime after leaving or worst – during the party. However when they questioned the Mortimers and the wait staff; everyone claims to have never have even seen Shelly.

The elite had closed ranks around the Mortimers and the only person that verified Shelly was at the party happened to be a small town kid that managed to befriend some of them. The kid knows what’s it’s like to be on the outside looking in and he felt he shared that with Shelly. She was out of place at the party. And the team soon guessed why.

They thought dear old George might have acted improperly towards her. He dioes have the reputation of mistreating the local girls. So they got a search warrant and the Luminol picked on a blood bath.

Mr. Mortimor lawyered up fast and that could have been the end to finding out what really happened to Shelly. Yet the Mortimers’ maid had evidence that someone else could have wanted to kill Shelly. And this new suspect was also at the very same party.

Well, it’s not like the impending groom was going to miss his own engagement party.

Travis was the poor kid that did good. He was going to be joining his future father-in-law’s firm and he was marrying into money. But Shelly was from his past. The one he desperately tried to hide from his new family.

Travis and Shelly used to date back when they were teenagers. That relationship changed once they became pregnant. Shelly had the baby and her parents adopted him after Travis signed off on his parental rights.

So there was the big dirty little secret and the team thought that Travis tried to hide it by any means necessary. Though they stopped suspecting him when he quickly confessed to the crime. It sounds weird but it really wasn’t.

Travis had all the reasons in the world to deny deny deny and yet he caved in – as if he was protecting someone. And if he was willing to go to jail for this person then the only way they could truly catch the killer was set to a trap using Travis.

They released him claiming they messed up the paperwork and he went straight to his brother. The brother was the one that killed Shelly. He didn’t want that girl ruining his brother’s chances of a better life. When the harsh truth is that was never a part of Shelly’s plan – she just wanted closure and not the money.

The team busted both brothers. Although Travis wasn’t the one wielding a clam knife as weapon; he still attempted to cover up a crime. So it was because of his brother, the one that worked to put him through a great school, that ended up costing Travis everything.

And as for the team – they enjoyed the rest of their impromptu vacation. Jo even started a summer flirtation with Dr. Bloom.