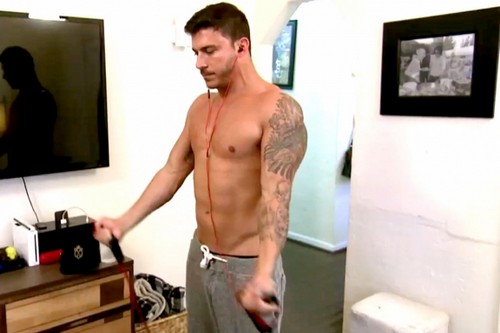 Tonight on Bravo VANDERPUMP RULES returns with a new Monday, November 3 season 3 premiere episode called, “Instafight.” On tonight’s episode in the Season 3 Episode 1 premiere, Lisa Vanderpump still rules over everything at SUR, but no longer rules over Stassi, who returns from New York to find everything has changed between her and her former friends.

On the last episode in part two of the Vanderpump Rules Reunion, the SUR staff opened up to Andy Cohen about why Kristen slept with Jax, why Jax had no remorse towards his old friend Tom, and whether Stassi could overcome the hurt and betrayal. Nothing had been the same since the explosive finale, and Lisa revealed how she’d been keeping it together at SUR, where old friendships and couples had split, and as always new, even more controversial alliances and romances had taken their place. Did you watch the last episode? If you missed it, we have a full and detailed recap right here for you.

On tonight’s show in the season 3 premiere, Lisa Vanderpump still rules over everything at SUR, but no longer rules over Stassi, who returns from New York to find everything has changed between her and her former friends. Meanwhile, Jax prepares for plastic surgery, Scheana plans her perfect birthday party, and Tom Sandoval sparks a romance with Ariana, but all happiness is jeopardized when Kristen digs up a secret that will rock everyone.

Tonight’s episode is going to be another drama packed one, which you won’t want to miss. So be sure to tune in for our live coverage of Bravos’ Vanderpump Rules Season 3 premiere— tonight at 10PM EST! While you wait for our recap, hit the comments and let us know how excited you are about the new episode of VR tonight.

Vanderpump Rules is back for all new season however some of the remaining drama from last season just can’t be laid to rest. Kristen, Tom, and Jax have all allegedly moved on since their love triangle rocked the boat at SUR. They’re each dating someone new and the guys have even begun to work together again. Yet, to this day no one regrets their once very good friend Stassi’s timely exit. Almost if her leaving kind of came off as a god send to some of them. So are they really over everything that’s happened or has one person in particular been pretty much blamed for all of their fights?

Well, according to Scheana, Stassi was at the heart of the problem. And without the other woman there to stir up trouble – Scheana says she has no doubts whatsoever about inviting both Kristen and her new boyfriend to her birthday party. Ergo Kristen and Tom will run into each other because Tom’s new girlfriend Ariana also happens to be Scheana’s best friend.

But, in spite of Scheana’s best claims, Kristen’s mouth is actually bound to cause more issues than Stassi’s sudden reappearance in West Hollywood. See while Stassi came back because her boyfriend was relocated – Kristen actively sought out ways to get back at her ex Tom. She ran into a fling of his he had in Miami while she was online one day and then she proceeded to talk this other woman up in order to get all the details about the fling. Like, why?!?!

Kristen goes out of her to explicitly say she’s over her ex and it’s not like there’s a chance for her with Tom anymore. So really she just wanted information to use against Tom and Ariana. Apparently, that’s how petty she is!

And luckily Ariana could see what Kristen truly is from a mile away. When Scheana told her everything Kristen had said, Ariana had already known this woman in Miami was lying. Tom had told her beforehand what did and didn’t go down in Miami so Ariana wasn’t as clueless as everyone thought. She did know about that girl and she knew the other woman was exaggerating what happened. But Ariana was angrier at Kristen.

What kind of woman stalks her ex merely so she could get proof he’s sleeping around behind his new girlfriend’s back? Kristen and Ariana aren’t friends!

Meanwhile Stassi who as I mentioned earlier is back and she claims she’s matured after only six months in NYC. She said after she distanced herself from the kind of people that seemed to only work at SUR, she realized she wanted more in life. So she started a style blog and she’s been looking for work until the blog can pay for itself.

She told all of this to Lisa by the way. Yet there wasn’t an immediate job offer right afterwards. Instead Lisa was quite passive aggressive with Stassi. She guilt tripped the other woman about not reaching out to her and then asked all about these new supposed friends Stassi must have made in NYC. You know the ones that must have replaced her.

Then later, as she was showing her new found maturity, Stassi planned an outing on the same night of Scheana’s birthday party. The one she has every years and that Stassi was once invited to. So Stassi was with a few friends at one restaurant and Scheana was with her friends at another. Then Stassi’s group started taking photos and putting it on Instagram and Scheana’s friends responded to those messages with photos of their own gathering. And that somehow turned into an Instagram war with each group wanted to out-do the other with the more amazing photo.

But the photos were to prove a point. Both groups wanted to say their party was better that the other guy’s. And if it was a competition then Stassi has to be the winner seeing as there wasn’t a fight at her gathering!

Scheana’s idea to invite everyone (meaning Tom, Ariana, Kristen, James, and Jax all at one sitting) was bit of a dumb move. A fight broke out between Tom and James. And truthfully that was inevitable the second Kristen tried to date James while stalking Tom.