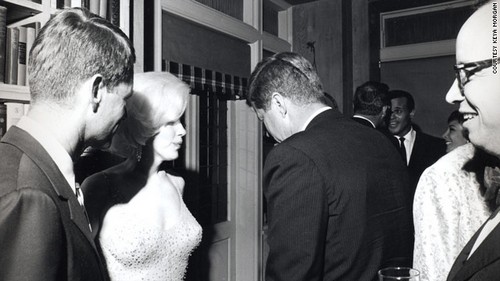 Castleberry, dubbed “The Bodyguard” by Hollywood elite, has protected a long list of celebrities, from Dennis Rodman to Anna Nicole Smith. He has a history of auctioning off celebrity items, even resorting to selling Anna Nicole Smith’s trash for a quick buck.

It was reported in 2007 that Castleberry, a consigner in an Anna Nicole Smith auction, auctioned off secret diaries of the former model through UniversalRarities.com. Castleberry has seen a lot of action over the years, and an incident involving him protecting Dennis Rodman is detailed in the former NBA star’s book, I Should Be Dead By Now.

Castleberry claims he is currently holding the Monroe sex tape and will not sell it if he can raise the $200 thousand dollars he needs to keep his home out of foreclosure. If he doesn’t raise the money, the film will be up for auction, just as the many items Castleberry has hawked in the past. It seems this man hs built a career on selling celebrity items he’s collected from former employers and friends. What are your thoughts on Castleberry? Weigh in CDLers!