Witches of East End Recap 10/5/14: Season 2 Finale “Box to the Future; For Whom the Spell Trolls” 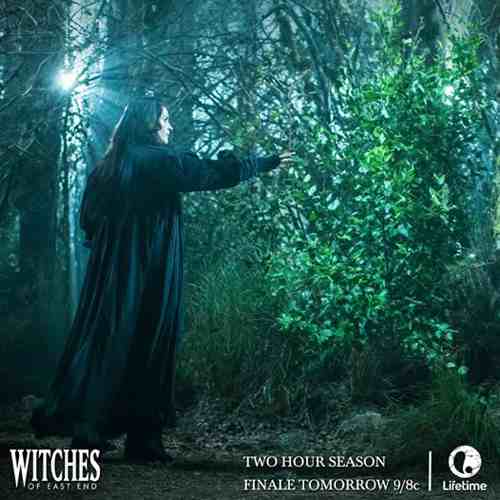 Tonight on Lifetime Witches of East End continues with an all new Sunday October 5, Season 2 finale, in a 2 hour special called, “Box to the Future; For Whom the Spell Trolls.” On tonight’s episode as Joanna attempts to travel back to the present, a dangerous admirer tracks her down in the past. Also Joanna tries to escape from Tarkoff.

On last week’s episode Joanna, Freya and Wendy revisited one of their past lives. Dash’s one night stand turned out to be someone interesting. Ingrid tried to bond with her grandfather. Did you watch the last episode? If you missed it, we have a full and detailed recap right here for you.

On tonight’s episode as Joanna attempts to travel back to the present, a dangerous admirer tracks her down in the past. Killian makes a rash decision after hearing about Freya. Frederick becomes suspicious of Ingrid’s intentions. King Nikolaus propositions Dash. Also Joanna tries to escape from Tarkoff. Freya and Wendy race to find a way back to the present. Ingrid learns shocking news about herself from King Nikolaus. Dash’s dark past closes in on him. Killian tries to stay alive.

Tonight’s season 2 finale episode is going to be great and you won’t want to miss it. So be sure to tune in for our live coverage of Lifetime’s Witches of East End Finale tonight at 10PM EST!

On tonight’s finale, it’s too late for Killian. Dash hadn’t gotten to him in time and so Killian had gone ahead with “re-arranging his stars”. He did this in order to be with Freya without their doomed love story ended the same way it has over the centuries – in tragedy. However the elixir he took was only ever going to work in the next life and not in this one. Which is unfortunate seeing as Killian only went through with this scheme because he thought Freya was dead. She’s not!

Now he’s dying a very painful death and is close to missing out on enjoying what little time he’ll have with Freya. Luckily, though he had a vision that ended up saving his life.

Killian had seen Freya alive and well. And in the vision she told him what to do to combat his imminent death. She told him to call Ingrid for help. Ingrid would know what to do with whatever the voodoo witches had given him.

Yet when Ingrid got the call – she didn’t even second guess her decision to go to him. She just went and that had made her brother very concerned. He thought she was getting too attached to people here in the moral world. So he warned his grandfather that Ingrid might not be all that excited at leaving people behind when she returns to Asgard.

You see Fredrick can remember who Dash and Killian were in Asgard. And for some reason he doesn’t like nor trust either of them. It seems they did something he can’t forgive and he’s been unable to let it go even though in this life the brothers can’t remember a thing.

And the king is the same. He wants to fix the Dash problem. Ingrid and Dash have been growing closer these last several months and the king considered Dash to be the biggest problem in getting Ingrid to leave with him. So he paid Dash a visit.

The king made him the same offer he apparently made in Asgard. He promised Dash rewards and unlimited power. And all Dash had to do in return was side with him in his fight with his family (the Beauchamps). But if Dash chose not to work with the king – then he’ll die like everyone else who defies him.

Dash then told Ingrid all about it. She me with him after she had given Killian what little she could. It wasn’t anything to reverse what he did – it just delayed his death a bit longer. Hopefully, long enough for Freya to come back and see what she can do to stop the potion he took. Potions is after all her field of expertise.

As for Dash, when he spoke with Ingrid he said he could never side with the man that threatened to kill him but Dash hasn’t really been the same man of integrity that he used to be known for. And according to the king, if he can be a man once known for betraying his friends for power then he could do it again.

Ingrid had left him alone with a very powerful and dangerous book. To do so she had to put her trust in him. And she did. Especially when he told her wanted to take down her grandfather as much as she did. But Dash got sidetracked. Agent Moreau had stopped by the house and their little booty call interfered with his plans to find a spell that would stop the king.

Though he shouldn’t worry. As it turns out he isn’t the only one that dropped the ball. The box Joanna had travelled back in time to fetch was soon stolen from her. Tarkoff got it and because of his sick obsession with Joanna – he didn’t kill Joanna like the king wanted him to. Instead he plans on keeping her his prisoner. His drugged up prisoner.

Joanna sadly used to have a habit and Tarkoff is planning on using that to get her to bend to his will. And Wendy and Freya aren’t exactly in the position to help seeing as they’re stuck in the 1800s. The door they were supposed to use had abruptly disappeared on them.

Ingrid is also of no use. Her grandfather is breaking her like he did with Frederick – through torture. Though the king chose to be easier on her than he was with her brother. He did that because he was able to see for himself that she was pregnant. Ingrid on the other hand hadn’t known about her condition until her grandfather had informed her.

Dash is going to be a father. And yet his main concern right now is dealing with the federal agent or as he likes to call her – Raven. She’s on to him. Raven suspects his involvement in the recent killings and she had actually used their latest tryst to gather evidence against him. She found some of the gunk that was found inside of their victims lying on the walls at Fairhaven.

Though he hadn’t known about the gunk. He simply thought she stole his books including the one Ingrid had left for him. Yet she hadn’t.

So when he asked her back to the house and demanded the returns of said books – she honestly didn’t know what he was talking about. In fact, she only came back to issue a search warrant. And that’s what Ingrid and Fredrick walked in after. They entered the house after everything of importance was gone or wiped out. Thankfully Dash has erased all of those threatening emails he had on his computer. Hence there’s no remaining connection between him and the two men he killed.

They had escaped their dear beloved grandfather after he both revealed his real agenda and stabbed Frederick. It seems the king never wanted to be part of a big happy family. He only entered the East End in order to steal his family’s powers. Or to use his expression – reclaim them.

First he took Ingrid’s powers though who knows who his target will be!

The king wanted all of the girls’ powers. They are each uniquely powerful and so he wants to take that and make himself stronger. However three out of the four were stuck in 1800s. Tarkoff had merely used spells to convince Joanna he had brought her through time again. When in reality she had never left the 1800s and so her sister was eventually able to find her.

Wendy saved Joanna from Tarkoff’s clutches and now the only problem they faced was getting back to their own time. But again Wendy came through for the family.

She had given a warlock a message and the poor man held onto it for nearly 200 years in order to give it Ingrid in the present. Ingrid without her powers couldn’t open the door on her own yet getting her brother’s help made the difference. He helped his family come back and though that’s not going to be enough to get them to forgive him – the fact he also supplied them with a curse to destroy the king just might be the one thing to bridge the gap between him and his mother.

The ladies went off to kill a king and they left Frederick behind. But they’ll later come to regret that. Killing the king was simple. Their powers after all has always been stronger together.

So they killed technically a god and then their world blew up around them. Dash who ended up getting arrested used a spell against his brother. This was after Killian had forgiven him for trying to kill him and after Killian was miraculously resurrected from the dead by Freya. And the spell Dash used caused the brothers to switch bodies. So it’s Killian that’s now in jail and Dash that’s going home to sleep with Freya.

As for Frederick, someone stabbed him and then a left message that said death to all witches. Meaning their secret is out and the entire family is back in danger!

Not that it will matter much to Wendy. She gave up her last life to save Tommy. Once her father’s soul had vacated his body – Tommy died. So she chose to save him seeing as it was her fault for introducing him to her world. Though afterlife isn’t going to be that appealing for her. She ran into her other sister and there appears to be an ugly history with more than just sociopathic father.

Is Frederick really dead? What’s going to happen when Dash finds out about Ingrid’s pregnancy? And how on earth is Joanna going to get her sister back from the underworld?

I can see myself going crazy while I wait for the next season! How about you?