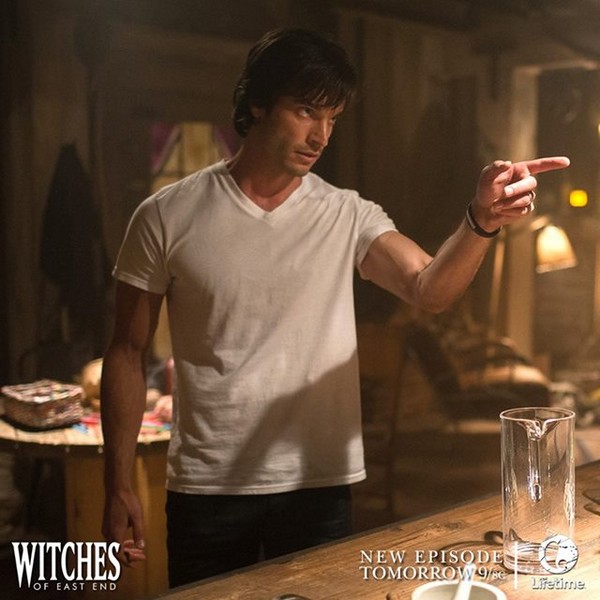 Tonight on Lifetime, WITCHES OF EAST END continues with an all new episode. On tonight’s show, called “Art of Darkness,” Tarkoff, an old friend of the family, visits Joanna and Freddie.

On the last episode Joanna and Alex try to put their past aside to focus on finding the Mandragora. Meanwhile, Freya asks Dash to help save Ingrid; Wendy becomes wary of Freddie’s loyalty. Did you watch the last season’s finale? If you missed it we have a full and detailed recap, right here for you.

On tonight’s episode Tarkoff, an old friend of the family, visits Joanna and Freddie. Meanwhile, Wendy, Freya, Ingrid and Dash attend an art gala where Wendy encounters someone from her past; and Killian begins to doubt his feelings for Eva.

Fredrick is still having seizures and the one time Joanna just happened to be near – she found him mid-seizure with a very terrified “girlfriend”. The girlfriend’s name is Caroline and that was the very first time she heard about a Caroline much less the Caroline. Although Wendy it seems has known about her for a while.

Since he saved her life, Fredrick and have his aunt have grown close. She’s been trying to help him stop his seizures and during the interim she managed to meet his girlfriend before his own mother did. So now Joanna wants to find a way to stop the seizures. She needs to be the one to find the cure because so far it’s the only thing Fredrick is willing to need her for.

But she can try as long as she likes to no effect. Anything she can bring to the table will still result in failure. The seizures are not caused by one simple curse or spell. It’s the King, Joanna’s father, that’s doing this to her son and none of its going to stop until Fredrick completes the mission his grandfather sent him on. Which is to find the King a host.

The King of Asguard wants to come down to earth and he’s going to need a body to do it. And with Fredrick dragging his feet on the matter – the King has chosen to enlist another one of his soldiers in making sure he everything goes according to plan.

Wendy meanwhile has a very real problem on her hands. Her ex-husband Ronan is back and she doesn’t want someone as selfish and manipulative as him around.

Wendy was invited to a very high class art party by a secret admirer and at first she was wanted to turn the invite down, but Freya convinced her to go. Wendy’s boyfriend was out of town and Freya was single so they were going to turn their night out on the town into a girls’ night. However, despite the sudden return of Wendy’s ex, Freya wasn’t enjoying the night either. Her ex was also at the party and he had taken her sister Ingrid as his date. Dash and Ingrid say they’re only friends yet they don’t look it.

They’ve been getting pretty cozy lately and it’s just not normal for a friend to buy another friend a dress. Especially when he tried the same maneuver with Freya!

The two of them have secrets and that’s why they’ve grown close, but what’s going to happen when their secrets are threatened? Dash had killed someone and though that person wasn’t the nicest guy in the world – he still has family. And that family apparently cares enough to hire a private investigator.

So what does Dash do with that information? After he learned people were onto him, he chose to handle everything by himself rather than go to Ingrid for help or in other words calm the situation. And there’s only one way he ever accomplishes this – he killed someone. Killing people has become so common place for him that it’s his default switch. Not even the cover-up fazed him.

Then when he was explaining his water down version of events to Ingrid – she had felt bad for him. They both know what it’s like to be the responsible one and the person basically left in charge over everyone else. But she can only sympathize with him for so long. Ingrid and Dash kissed and yet her sister was right about him. Dash isn’t one of the good guys.

He hurts people and often the person he hurts is the one he cares for most. If Killian could barely survive him then how will Ingrid?

Killian’s new wife has him trapped in her spell so Freys isn’t happy and Wendy’s ex merely came back to use her magic. So perhaps romance isn’t in the cards for the Beauchamp Family? They don’t seem to be able to keep anyone around!

As for Fredrick new partner, he was once a very good friend of Joanna and Victor’s. So he was able to pray on that past relationship to worm himself into Joanna’s house with little to no trouble one night. The other man was put in his position to oversee Fredrick’s part in the plan because the King no longer trusted his grandson to act alone. He had felt like his grandson was purposely holding back on him and to an extent he was right.

Fredrick is stalling on bringing his grandfather to earth. Though Fredrick never had an official change of mind. All the way up to actually poisoning Joanna – he truly thought he could it. And when he abruptly changed his mind about oh say poisoning his only mother that left their dinner guest in the position to finish what Fredrick couldn’t.

Yet Joanna was then saved from her false friend by her son. It looks like he holds the key to the king’s return and unless the King’s followers want him dead – they now know Fredrick’s family is off limits. He’ll help them bring back a mad man in exchange for his family being protected.

But how is Joanna’s going to feel about what her son did when or if she ever finds out?