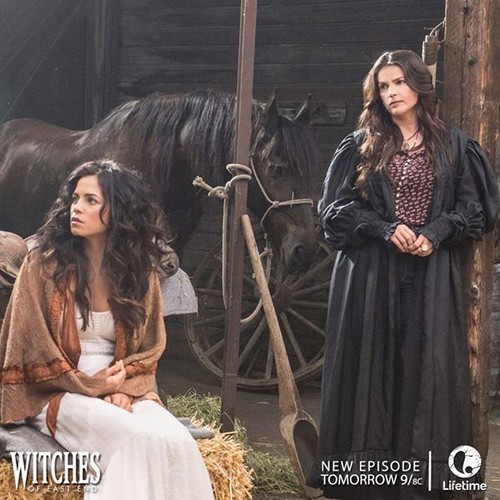 Tonight on Lifetime Witches of East End returns with an all new Sunday September 28, Season 2 episode 11 called, “Poe Way Out.” On tonight’s episode Joanna, Freya and Wendy revisit one of their past lives; Dash’s one night stand turns out to be someone interesting; Ingrid tries to bond with her grandfather.

On last week’s episode Joanna was devastated by Tarkoff’s actions and tried to take drastic measures. Dash’s secrets started to come out. Wendy and Joanna reconnected with their father. Did you watch the last episode? If you missed it, we have a full and detailed recap right here for you.

On tonight’s episode Joanna, Freya and Wendy revisit one of their past lives. Dash’s one night stand turns out to be someone interesting. Ingrid tries to bond with her grandfather.

The ladies have travelled back to Baltimore in 1843. Yet Ingrid didn’t want to go with them and the last minute chose to stay with the rest of her family. If, at the end of the day, they can really be called that!

Joanna though has some understanding of why Ingrid stayed. She even says the decision wasn’t all that unusual. Her daughter and father have always had a strange bond. The relationship goes all the way back to Asgard so it figures Ingrid would stay with him when she was at her most confused and lost.

Unlike Freya who seemed to be able to keep going no matter what or at most learned to accept things outside of her limits – Ingrid harps whenever there’s a setback. It’s the researcher inside of her. If something goes wrong then she wants answers. So when a grandfather notorious for abusing his own family arrives – she wants a chance to dissect him for herself. Learn who he really is and how he came to be that man.

Truthfully, nothing else in her life so far has been turning out as she thought it would. She recently lost a very good friend and Dash went all out psycho killer on her.

Dash’s one night stand also happened to be a FBI agent and she’s investigation the rash of murders that’s been going around town. Some of which – Dash is personal responsible for. So he has an eye on her and thankfully she’s not dumb – she suspects there’s more to the good doctor than he’s letting on.

Then there’s Killian. He’s gone to some voodoo priest (friends of the late Eva) in order to find a way to be with Freya. And this time without their curse ruining things for them. He knows they’re star-crossed lovers so he wants a chance to be able to live with Freya, happily, for the rest of their days. However there’s a price to such magic. Realigning the stars is going to cost Killian his life.

And does he really want to take the off chance the spell will work for him in the next life. The time Freya, Joanna, and Wendy all travelled back to also had a Killian. But in that time he was called Edgar Allen Poe. Freya had been his muse for many of his dark works until ultimately the well had run dry on his end.

So Freya tried to be supportive and thought a summoning would help. Inadvertently, they conjured the wrong kind of spirit. An evil one was allowed to come through and it proceeded to take possession of Freya. Poor Freya was unaware of it and so she didn’t know she was being used to kill mortals.

Edgar picked up on it though. He was able to warn her family in time and they were the ones that had to make the hard decision. In order to cast the spirit back to where it was from – they had to kill Freya and when she dies – Ingrid dies too.

It was tough but the women chose to sacrifice the girls seeing as it was for the greater good. Yet Joanna chose to return to such difficult time because she was meant to. Back in the 1840s – she saw a Modern Joanna and her other self had asked for a certain box.Its probably one of the few things that can kill her father!

Meanwhile back in modern times, Ingrid realized how dangerous her grandfather was and rather than let him know she knows – she’s pretending to be on his side. That way she could find out what he was planning (he’s brought Tarkoff back into the fold) and have Dash act in her name to stop him. Dash owes her for manipulating her into covering up for a crime so he’s willing to do what she says.

But first he wants inform his brother that Freya is alive. He saw for himself how torn up Killian was and he wants to reach him before the other man can go and do something stupid.