The Young and the Restless Spoilers: Victor Newman Wants Cassie To Leave Town But She Feels Badly About Sharon – A Third Person Sees Her! 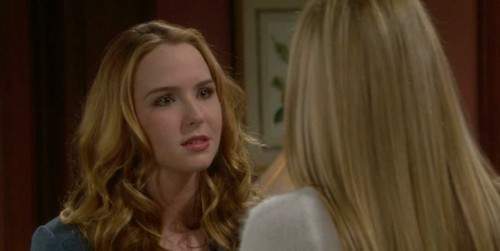 After spending quite awhile lurking in the shadows and behind trees in the park it looks like this week Faux Cassie – the “ghost” –  is finally going to get caught on The Young and the Restless. While Victor Newman originally summoned her to help keep Nick and Sharon apart, even he wants faux Cassie to just disappear. Unfortunately, she has grown attached to Sharon especially after seeing her at her most vulnerable and after watching her with Nick even Faux Cassie thinks that they might just belong together.

Faux Cassie will collide with Noah while trying to leave the park in a rush. Even though she ends up on the ground she refuses his assistance and gets herself out of there fast. A second person, Stitch, also comes into contact with Cassie and he takes her to hospital. In that instance everyone will be left wondering whether or not Stitch will speak up and by the end of the week a third person will spot faux Cassie. That is the sighting that will cause a rippling effect throughout Genoa City.

Of course Victor wants Cassie gone out of Genoa City ASAP but Cassie feels sadly about the part she’s played in harming Sharon. Note that she tells Stitch: “I’m not in any trouble, I just caused some.” If I had known what the consequences were…Will Cassie’s growing sense of remorse and morality cause her to stay around too long for Victor’s well being?

Do you think Victor will get caught once faux Cassie is revealed? Will she spill the beans on the part that he played in bringing her to town? Will this be one of those very rare occasions where Victor Newmans’ dirty dealings are revealed and he finally gets what is coming to him? Tell us your thoughts in the comments below!