The Young and the Restless Spoilers Feb 27: Can Dylan Stop Ian Ward From Kidnapping Summer and/or Nikki and Getting Away With the Money? 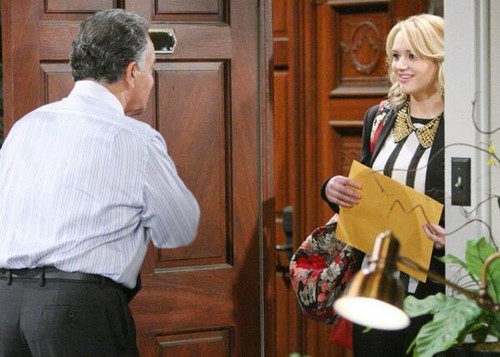 The Young and the Restless fans knew Ian Ward was dangerous and diabolical when he arrived in Genoa City, but nobody expected him to show his evil side this quickly.  Recently Ian Ward has been working his magic on Summer Newman and has convinced her he was a life coach named John Darwin. Once he got Summer’s interest he got her to agree to join his program an got her to take a selfie with him.

Ian sent Nikki Newman a text message with the photo of him and Summer.  Nikki immediately called him and said she sound upset and that, “can’t be good” for someone with her health issues.  Nikki finally asks what she needed to do to get him to leave her and her family alone and to leave town.  Ian agreed to leave her family alone and leave town, if Nikki delivered $5 million dollars to him, and told no one.  And then he added, “You’re such an obedient girl, I always loved that about you,” before he hung up.  Then Ian called the airport and booked a plane out of Genoa City for 7:00 PM.

Before Nikki showed up at Ian’s Suite Summer stopped by his hotel to give him signed documents.  Then Nikki showed up and as Ian tried to talk to her she shoved the money at him and told him to get lost.  She then heard Summer say “Grandma?” and she yells “Summer?”

Who do you think he plans to take with him?  Considering how evil he is, the odds of him leaving town willingly without Nikki or Summer are slim to none.  Family is very important to Nikki, she would volunteer to leave with Ian in a heartbeat if it meant sparing Summer.

Meanwhile, at the bar Avery tells Dylan and Nick she saw Nikki rushing out of her house with a suitcase and warned the men that Nikki was acting strangely.  Faith overheard their conversation and chimed in that John Darwin was Summer’s life coach.

Dylan and Nick feared that Summer and Nikki are in danger.  Dylan and Nick leave and  run out to head to Ian Hotel Suite.  But, will Dylan be able to stand up to his estranged Dad?  Dylan and Nick have no idea that Ian has Nikki and Summer, they are on their way to confront him because they think Ian is “up to something.”   When Nick and Dylan get to Ian’s Suite the Suite is empty.

In scenes from tomorrow’s episode we see that Dylan has found Ian and they are facing off.  Dylan says to Ian, “You don’t think I am letting you by?”  Will Dylan be able to stop his evil Dad?  Where are Summer and Nikki?  What happened to Nick?  Let us know what you think will happen tomorrow on The Young and the Restless in the comment section below.