Young And The Restless Spoilers: What Is Ian Ward’s Ex-Wife Willa Hiding? 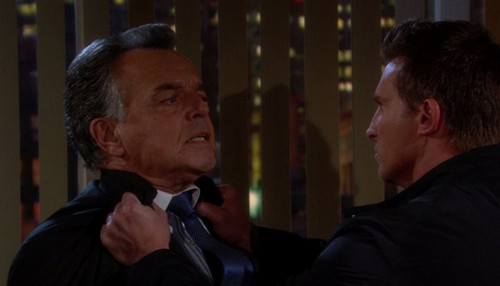 The Young and the Restless’ Ian Ward’s ex-wife, Willa, is hiding something, but we don’t know what it is. When she tried to tell Dylan and Avery, they completely shut her down, despite the fact that they were the ones initially begging for any information. So what could Willa be hiding?

Some brief background for those who haven’t caught up on the show. Ian’s a douchebag and a scammer, and no one likes him, but until now, we’ve always assumed that he’s Dylan’s father. But what if that’s not true, and what if that’s the secret that Willa’s hiding?

Ian is currently in jail for trying to extort money from Nikki Newman, Dylan’s mother. But when he was caught and Dylan threatened him, he told Dylan, “If you kill me you will never know.” Ian also hints at this secret while talking to Paul, but he doesn’t reveal anything further.

However, things start getting more serious after Ian’s ex-wife, Willa, comes to Crimson Lights looking for Dylan. She asks Dylan about Ian’s whereabouts, and Dylan informs her that Ian’s currently in jail. Willa then tells Dylan and Avery that she holds very important information but she’ll only give it to them if she gets paid for her information. Dylan and Avery get upset, and tell Willa to get lost. Keep in mind, they’re the ones who tracked down Ian’s ex-wife and begged her for any information on Ian, and now that she shows up, they run her off?

Sure, she wants money and that’s always sketchy. But considering her circumstances and their desire to find out the truth, isn’t it worth it? Anyway, after Willa leaves, Dylan starts to wonder why she really showed up.

We’ve already speculated about the possibility that Paul is Dylan’s real father, not Ian. That’s information that both Ian and Willa would know, and that’s perhaps the big secret that Ian’s covering up and that Willa wanted to tell Dylan. But is it too late now? Will the truth come out eventually? Or was Willa referring to something else entirely?