Adam Levine Skips Behati Prinsloo’s Fashion Show, She Parties Night Away Without Him – Hot Couple On Verge Of Nasty Divorce? 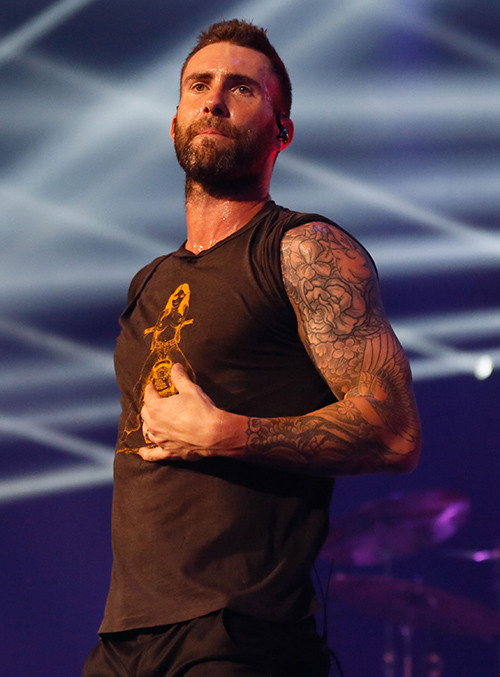 The Voice’s Adam Levine and his wife Behati Prinsloo have been plagued by divorce rumors for quite a while now. Adam Levine recently addressed break-up rumors and insisted that he and his wife, supermodel Behati Prinsloo were just as happy as ever, but no one is buying it. According to previous reports, Adam and Behati have not been seeing eye to eye on having a baby – Levine’s career is at an all-time high, and he doesn’t want to give up any of his free time to start playing house with his wife Behati and raising kids.

According to an all new report from OK! Magazine, Adam Levine once again let his career take precedent over his family – and he missed Behati’s biggest fashion show of the year, Victoria’s Secret, because he was filming The Voice on the other side of the country. The fact that Behati was totally cool with her husband missing one of the biggest nights of her career only further supports the rumors that there is trouble in paradise for the musician and model.

An insider at the Victoria’s Secret Fashion Show dished to OK! Magazine, “The Maroon 5 frontman sent roses, candy, and a card to show his beloved support. Not that Behati minded his absence, she went straight into party mode after the show, hitting the clubs with her girlfriends.” The insider added that Behati wasn’t exactly carrying herself like a married woman and “she also seemed to love the attention from all the guys that she got that night.”

Well, it sounds like when Adam Levine is away, Behati Prinsloo likes to play. Adam Levine might think that there is nothing wrong with his marriage, but it looks like he is sadly mistaken. No happily married woman would be happy that her husband missed a huge night for her, and even happier that she got to go out on the town and flirt with random guys. Do you think that this is the beginning of the end for Adam Levine and Behati Prinsloo? Will Adam be the next The Voice coach to get a divorce? Let us know what you think in the comments below!