BY Sean O'Brien on November 24, 2015 | Comments: Leave Comments
Related : All My Children, Celebrity Death, Days of Our Lives, General Hospital, Hot News, Soap Opera, Television, The Bold and the Beautiful, The Young and the Restless 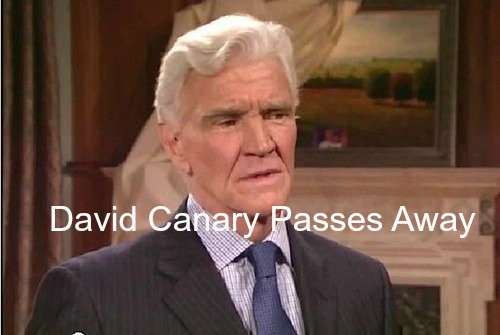 ‘All My Children’ alum David Canary died on November 16 in Connecticut due to natural causes at the age of 77 years old. Canary’s family published his official obituary in the Wilton Bulletin (his local Connecticut newspaper) on November 24. Canary left behind his wife Maureen, and two children Christopher and Kathryn.

David Canary boasts an impressive acting resume. He began a career on Broadway right out of high-school, however he was drafted by the Army and served two years for his country. Upon his return to the states, David resumed acting and appeared in a night-time soap called ‘Peyton’s Place’ in the 1960’s. Canary also starred in a handful of movies including, “The St. Valentine’s Day Massacre,” “Shark’s Treasure,” and “Johnny Firecloud.”

The iconic actor is most well known for his role on the now cancelled daytime drama “All My Children.” David Canary played the part of Adam Chandler (and Stuart Chandler) for over 20 years. Canary began his stint on “All My Children” in 1983, and he continued to star on the soap opera up until 2011.

Then Canary returned to the soap opera again for a brief stint in 2013. Not only did Canary make “All My Children” his soap home, but he also moonlighted on “One Life To Live” for a few years as his “AMC” character Chandler.

Canary’s funeral services will be for immediate family only, there will be a later memorial tribute for fans to pay their respects – the date will be announced later on. Memorial Donations can be made to the Alzheimer’s Organization in David’s name. It’s a sad day for “All My Children” fans, and we offer our condolences to Canary’s friends and family.