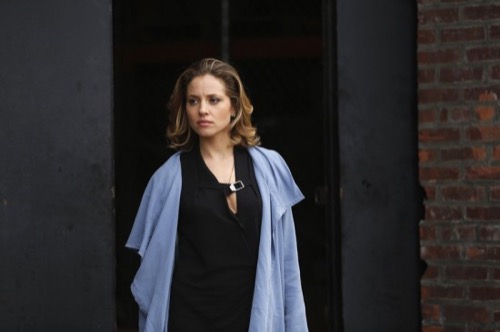 Tonight on NBC Allegiance airs with an all new Thursday February 12, season 1 episode 2 called, “Teamwork” and we have your weekly recap below. On tonight’s episode, Katya [Hope Davis] manipulates Alex [Gavin Stenhouse] and makes him think he’s mistaken when he almost exposes his parents as spies, but her lies lead to a rift in the family. Meanwhile, Victor is warned to keep the O’Connors under control; and Alex teams up with an FBI agent.

On the last episode, Rookie CIA analyst Alex O’Connor (Gavin Stenhouse) was assigned his first case – to examine the statements of a defecting Russian spy, who claimed that rogue elements within her organization were planning a catastrophic attack that would bring America to its knees. Unbeknownst to Alex, his parents, Katya (Hope Davis) and Mark (Scott Cohen), were part of the dormant Russian sleeper cell he was investigating, and an unwelcome friend (Morgan Spector) from the past arrived on their doorstep to give them a new mission: turn their son into a spy before his investigation unmasked them. With nowhere to turn, Katya and Mark had to choose – flag, or family. Also starring Margarita Levieva (Natalie O’Connor), Kenneth Choi (Sam Luttrell), and Alex Peters (Sarah O’Connor). Did you watch the last episode? If you missed it, we have a full and detailed recap for you right here.

On tonight’s episode as per the NBC synopsis, “Mark (Scott Cohen) and Katya (Hope Davis) are nearly exposed as spies by their own son, Alex (Gavin Stenhouse). Then, in a brilliant bit of manipulation, Katya manages to convince Alex he is wrong. Katya’s lies cause a rift between her and her husband and son. Victor is acutely warned of what will happen to him if he doesn’t keep the O’Connors on a tight leash. Meanwhile, Alex partners with Agent Michelle Prado (Floriana Lima) as part of a joint CIA-FBI task force to find the hidden SVR cache before it’s destroyed. Alex’s unique perspective is the key to unmasking the identity of a new defector, leading to a deadly confrontation with an SVR hit team. Also starring Margarita Levieva (Natalie O’Connor) and Kenneth Choi (Sam Luttrell).”

Tonight’s episode looks like it is going to be great and you won’t want to miss it, so be sure to tune in for our live coverage of NBC’s Allegiance at 10:00 PM EST!

Tonight’s episode of “Allegiance” opened with Alex confronting his parents. He had evidence of a childhood friend of his mother having been a spy and so he felt for sure he had them backed in the corner. However, no matter how much they may wish it; his parents couldn’t come clean with him. It seems they had sold their story of Alex being too weak so well – the SVR no longer thought it was a good idea to turn him into a spy.

So Alex and his family (because they wouldn’t have forgotten them) would have been killed if his parents had told him the truth. But lying, at least towards Alex, proved to be just as difficult as telling the truth.

Apparently, Alex has been keeping a tally. He can remember, to almost twenty years ago, when his mother claimed she would be in one place yet he had known she lied. So in order to throw him; his mother told him the one thing she would never lie about. She told him she had been having an affair.

And her husband, for his part, acted like a wounded husband.

Thus, Alex had felt so guilty about possibly threatening his parents’ marriage that he stopped with all the questions. And then he fled. He decided it was better to hide out at work for a while as he gives his parents some breathing room.

As for the people listening in on the family’s conversations, the boss had decided to let Alex and his family leave. For now, anyways.

As long as Alex is kept in the dark, no one is worried about him. Yet it appears they should be. Because, when Alex returned to work – he helped the Feds bring in a Russian spy. And if that’s something he can do on day 2 then who knows what he’s capable of?

Alex had caught the SVR agent as he was spying on them and the feds incidentally lost him. It was a case of ill-timing that was really no one’s fault. Though, luckily, all was not lost because of that (somewhat gigantic) blunder.

Later, the same agent that had eluded them had contacted them in order to, in a strange turn of events, make a deal. According to him, Agent Vaso wanted to defect and he was even willing to use files he had stolen from SVR to grant him assylum. But, and this is the kicker, Vasso didn’t know where the files were currently hidden.

He had been the one to steal them yet he told Alex he had then given them to a friend of his for safekeeping and as luck would have it – the friend was murdered in the pilot. So Vaso doesn’t know where they were hidden however he told Alex that if those files hadn’t been found in the next 48 hours – they’ll automatically delete themselves.

It was fail-safe had put in to protect him and Mikhail. Though, it’s backfiring on them now.

When Vaso had reached out to Alex and his partner, he did so with the promise it would be a secret meeting. Yet, Alex’s parents had already bugged most of their son’s things. Including the buttons in his shirt. So the SVR were listening in as Alex and Vaso talked.

And they tracked the both of them to the docks!

Vaso ended up getting a gunshot to the stomach and regardless of their assurances – a sniper was also targeted at Alex. Arkady Isakof, the man in charge, had changed his mind about using Alex and was going to kill him once he realized how dangerous he was.

But Katya stopped him. It seemed she had followed her son to his meeting as well and she was willing to kill a fellow Russian to protect her son!