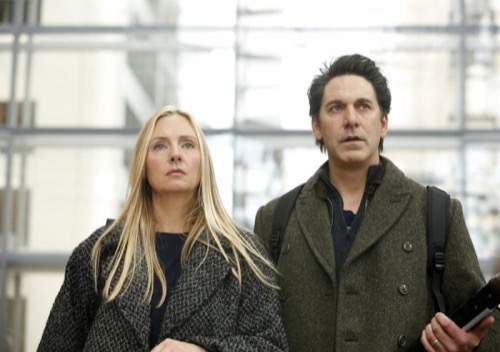 Tonight on NBC Allegiance premieres with an all new Thursday February 5, season 1 premiere episode called, “Pilot” and we have your weekly recap below. On tonight’s episode, in the series premiere of this drama, a CIA rookie gets his first case and unknowingly investigates his parents, who are part of a Russian sleeper cell.

Allegiance is about a young idealistic CIA analyst specializing in Russian affairs, learns a shocking secret and his close-knit, affluent family is about to be split apart when its revealed that his parents, Mark (Scott Cohen, “Necessary Roughness”) and Katya (Hope Davis, “The Newsroom,” “In Treatment”) are covert Russian spies deactivated decades ago. But today the Kremlin has re-enlisted them into service as they plan a terrorist operation inside the U.S. border that will bring America to its knees. Years ago, Russian-born Katya was tasked by the KGB to recruit American businessman Mark O’Connor as a spy – and the two fell in love.

On tonight’s episode as per the NBC synopsis, “Rookie CIA analyst Alex O’Connor (Gavin Stenhouse) is assigned his first case – to examine the statements of a defecting Russian spy, who claims that rogue elements within her organization are planning a catastrophic attack that will bring America to its knees. Unbeknownst to Alex, his parents, Katya (Hope Davis) and Mark (Scott Cohen), are part of the dormant Russian sleeper cell he’s investigating, and an unwelcome friend (Morgan Spector) from the past arrives on their doorstep to give them a new mission: turn their son into a spy before his investigation unmasks them. With nowhere to turn, Katya and Mark must choose – flag, or family. Also starring Margarita Levieva (Natalie O’Connor), Kenneth Choi (Sam Luttrell), and Alex Peters (Sarah O’Connor).”

Tonight’s episode looks like it is going to be great and you won’t want to miss it, so be sure to tune in for our live coverage of NBC’s Allegiance at 10:00 PM EST!

What if your whole life was a lie? That nothing your parents ever said about themselves or where they grew up was true? Well, while that might be a stretch for some, Alex O’Connor doesn’t have to get caught up wondering about those possibilities when it turns out that is his life. And his parents aren’t who they say they are.

Apparently, from a very early age, his parents have been keeping secrets from him. One of them, chiefly being, that they were secret SVR agents with the sole intent on spying on the US for their government back in Russia. Or that, in spite of working out an agreement some time ago about getting out of the game, the O’Connors have recently been pulled back into the spy game when the Russians found out they could use the couple’s son Alex.

Poor and unaware Alex has just started working at the CIA as an analyst. He’s been there for four months and yet he’s managed to gain some recognition for his work. So it was suggested that he’d move away from the safe analyst floor and that he be put out on a real mission.

However, this mission Alex got himself involved in means that he has sit it on a meeting with a defector. This defector, according to the SVR, could have access to files naming every SVR agent currently in America. So imperative to the US government that get this woman to talk and it’s also imperative to the Russians that the O’Connors bring their son over to their cause so that he could ruin the whole investigation for them.

But rather than turn their son like they did with their older daughter, the O’Connors tried to flee. They were simply going to make up everything and make a run for it.

Sadly, this plan was found out and they were ultimately forced to stay put. Meaning they only had two options left. They could finally tell their son the truth or they could wait until he and his coworkers come to arrest them.

Meanwhile, Alex continued to impress those around him as he kept on working on the mission and he ended up hurting his parents’s cause without knowing he was doing so.

They, on the other hand, didn’t want their son getting hurt. Because unlike his older sister, Alex was different. He didn’t speak for the first several years of life and then one day he just started speaking in sentences. So, Alex has always been special but he’s also unpredictable. And his parents used that as an excuse to get an entirely new deal with the SVR.

Originally, Katy O’Connor was just going to turn herself in but with this new deal she and her husband have agreed to spy on their son. They swore they would get their hands on whatever information their son had at his disposal (it’s not like he would ever hide things from his parents anyways) and they told their handler they would hand off everything they got from Alex.

They steal from him in order to protect him.

They had made this agreement so that Alex wouldn’t be recruited but their oldest daughter Natalie has been part of the organization for a very long time now and her scruples doesn’t really match up with those of her parents. You see, Natalie was the one that ratted on them. It seems she told their handler that they were trying to leave the country because she wanted to impress her boyfriend who happened to be another SVR agent.

Yet, in spite of everyone’s best efforts, Alex proved to be just too good at his job and he eventually found out the truth about his parents from his investigation instead of hearing it from them. And so now he feels betrayed. He wants to know everything and he wants them to stop lying to him.