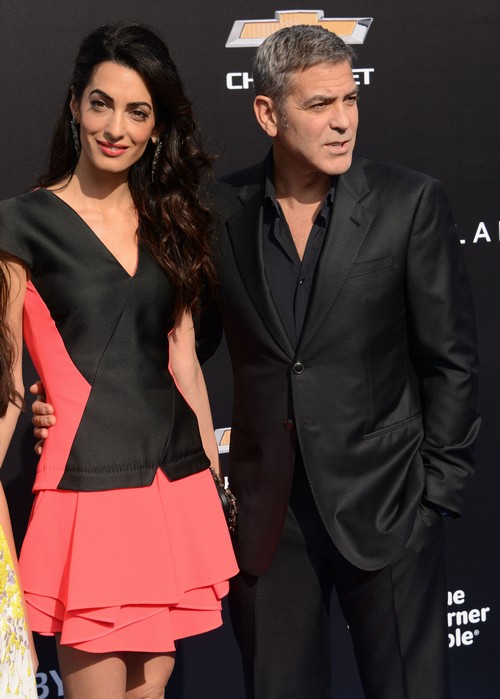 George Clooney’s wife Amal Alamuddin has a new face! It seems like every time the actor’s wife steps outside, she looks a little less recognizable – the new A-Lister appears to be dabbling in plastic surgery and some sort of anti-aging regimen. It really is ironic that Amal Alamuddin reportedly hates Hollywood and George Clooney’s celebrity pals – but the human rights attorney is becoming just as vain as the rest of them.

When George Clooney and Amal Alamuddin got married in 2014, George admitted that it was a tough adjustment for his new bride – and she was having a tough time dealing with living under the microscope and all of the attention she was receiving. Since Amal and George’s wedding the busy attorney has been shedding pounds that she really couldn’t afford to lose, and sources say she has become obsessed with her appearance and weight. Now, along with extreme dieting – Amal appears to have turned to plastic surgery as the stresses of living in the limelight take a toll on her.

According to a new report from Radar Online there is no doubt that Amal Alamuddin’s face has undergone some changes since she married George Clooney last year. A top plastic surgeon dished to Radar, “She looks like she is aging in reverse! Her skin is pristine and may have benefited from regular chemical peels. Her forehead is smooth and wrinkle free, possibly from regular injections of Botox. She also has very full lips, which could be due to injections from a filler like Juvederm.”

Amal Alamuddin began her relationship with George Clooney scoffing at Hollywood, and unconcerned with everyone’s opinion of her. Now, she appears to have done a complete 180, and is obsessed with her appearance and how she is perceived in the public eye. Do you think that Amal Alamuddin has changed since she married George Clooney? Is she just another typical celebrity now? Let us know what you think in the comments below!

Before Photos by FameFlynet

After Photos by FameFlynet