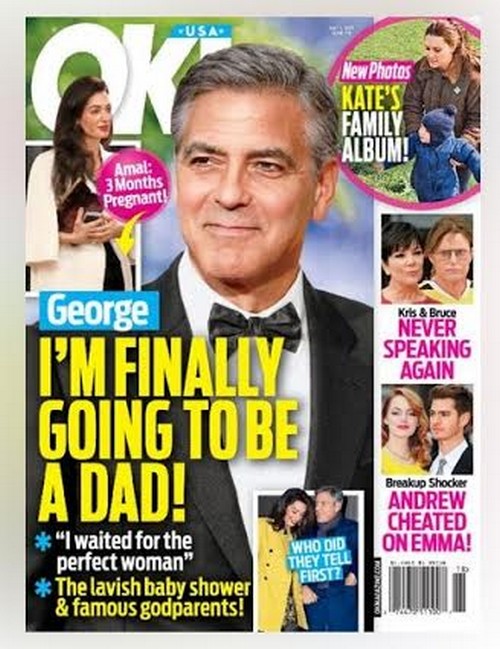 Amal Alamuddin is pregnant with baby number one, and actor George Clooney is going to be a dad according to a most unlikely report! Rumors have been floating around since George and Amal’s wedding in September 2014 that the couple was trying to get pregnant – and it looks like they were successful. Amal Alamuddin is reportedly three months pregnant and was spotted with what looks like to be a baby bump.

The May 4 edition of OK! Magazine reveals that the human rights attorney and actor are indeed expecting their first baby together. According to OK!, “The news, while happy, was a bit of a surprise to the couple. They had begun trying – or at least not preventing – shortly after their September wedding.” The magazine’s source reveals that George Clooney was afraid that “everything was not in working order,” after all the man is 53 years old, and was certain they would have to visit a fertility specialist. But, it turns out that wasn’t the case and Amal got pregnant the old-fashioned way.

So, who did George and Amal share their baby news with first? George’s parents Nick and Nina obviously. According to OK! Magazine’s insiders, “They thought it was another one of his practical jokes, but once he convinced them that he was serious they were absolutely overjoyed.” After George and Amal’s parents received the baby news, the couple began discussing godparents – and they aren’t exactly seeing eye to eye on the matter. According to the report, George wants to ask his longtime pals Rande Gerber and Cindy Crawford. When Amal shot down that idea, George mentioned Brad Pitt and Angelina Jolie – Amal wasn’t having it, considering her feud with Brad’s wife. According to OK! Magazine, Amal wants her sister Tala to take on the role and she is already planning for Amal a lavish baby shower in New York City.

George Clooney is thrilled to be starting a family and a soon-to-be dad. But, is his overly ambitious human rights attorney wife Amal on the same page? Amal was rumored to be pushing George for a baby, but now that she finally got her wish she is starting to realize that she is going to have to put her career on the backburner and once the baby arrives Amal will have scale down on her jet-setting and actually make a permanent home for herself and her family.

Are you surprised that Amal Alamuddin and George Clooney were able to get pregnant without visiting a fertility doctor? Who do you think they will choose to be the godparents? Is this the end of Amal’s powerful career as an attorney? Or is this report simply not true? Pregnant or not Amal might consider eating some food! Let us know what you think in the comments below!