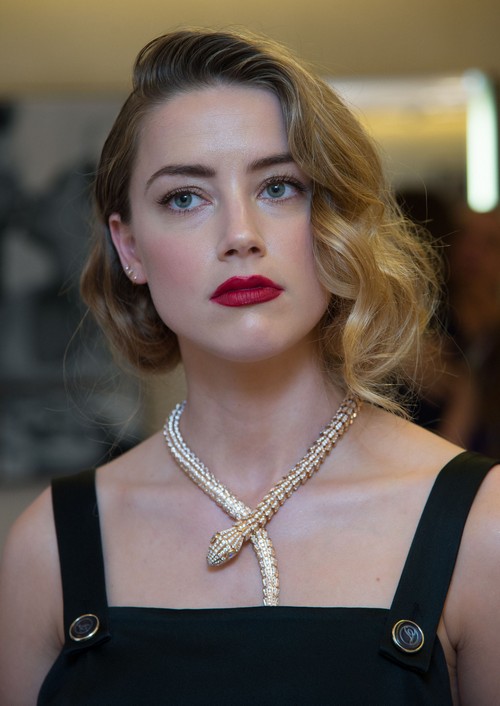 Captain Jack Sparrow may be broad-minded when it comes to the women in his life, but Johnny Depp seems to be far less of a libertine than his on screen counterpart. Johnny Depp is rumored to be upset that his new wife Amber Heard has an eye for the ladies. Could it be that Johnny Depp wants to be the only one in the relationship checking out younger women?

Sultry Texan Amber Heard is not only doesn’t take any guff from her famous husband and it seems like she’s got him whipped good and scared that she might be the one to walk away from their marriage. In a number of interviews, Amber Heard has made it clear that if Johnny Depp is expecting someone complacent like his baby mama Vanessa Paradis, he needs to check himself.

First, Amber has made is clear that she was bisexual before she met Johnny and still is despite them being married. Second, she told W Magazine, “I don’t imagine myself, my work, or my life, fitting into any kind of standardized path. In fact, the idea of there even being a standard freaks me out a lot.” So she’s clearly not looking to be Depp’s arm candy and he’s getting scared about it.

A recent National Enquirer article said, “Johnny’s terrified and doesn’t know what to do.” Since we know Amber likes the ladies, maybe she just decided to make Depp her b*tch… He’s acting like it, for sure. Johnny Depp is selling his nearly $30 million estate in France because Amber Heard says it reminds him of his ex Vanessa Paradis and he renamed his Caribbean island property “Amber Island.”

Wow. Amber Heard has nailed down Johnny Depp in a way that Vanessa Paradis never could. Vanessa and Johnny’s relationship was plagued with rumors of his cheating – first with Amber herself while they were shooting The Rum Diary and later with flight attendant Julie Ellis who is his “personal” flight attendant (does that mean permanent partner in the mile high club?).

But it looks like if anyone will be scoring the ladies in this marriage, it will be the much younger Amber Heard. Rumor has it that Johnny Depp agreed to let Amber Heard continue to date women while they were just dating, so long as she was honest about it. But then, according to Star Magazine, Johnny got way more smothering once they were wed and wanted her all to himself.

But now Amber is bristling and National Enquirer reports that she can’t take “the potential of losing my freedom.” And that’s what got Johnny Depp in a panic. Let’s face it, he’s almost 30 years her senior and was a big catch when he belonged to someone else, but now that Amber Heard has him licking her boots, Depp is increasingly less interesting.

Vanessa Paradis has to be laughing hard about now – she never cared about marrying Johnny – Vanessa is French and they’re casual about that stuff, after all – so Johnny Depp didn’t press the issue, but he couldn’t wait to lock down Amber Heard. Johnny worrying about Amber cheating on set with a beautiful woman when that’s what he did to Vanessa – and it’s hilariously karmic.