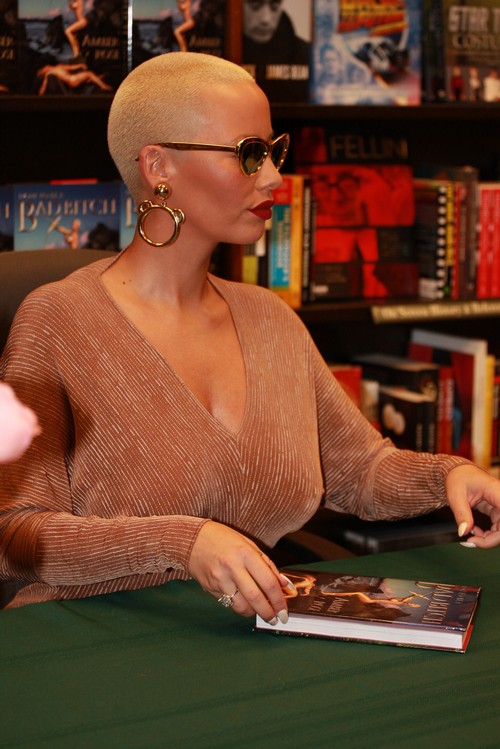 It’s unclear if Amber plans to completely copy Kim Kardashian’s photo shoot with the magazine that took place last year. There’s a good chance she will pose nude, since everyone has already seen it anyway. As far as the infamous champagne fountain shot, who knows if Amber Rose will take shots like that too.

Amber Rose did sit down with Sirius XM’s Paper Radio to talk about the photo shoot. Rose teased about the upcoming spread by saying that she will be paying homage to many “feminists throughout the years.”

Rose recently released her book, “How To Be A Bad Bitch,” so the Paper magazine spread comes at the perfect time to do a little promotion. The former stripper turned internet model recently criticized her interview with GQ magazine after the men’s mag referred to Amber as “Kanye West’s ex” and “Wiz Khalifa’s baby mama.” Amber Rose wants people to remember her for much more than the famous men she has been romantically linked with.

In the past, Amber Rose has been very skeptical of the Kardashians. Rose let loose with major shade in a radio interview over the summer when criticizing Tyga’s relationship with then-underage Kylie Jenner. Amber’s words ignited a feud with the Kardashian family that involved a huge internet fight with Khloe Kardashian and even elicited the infamous “30 showers” zing from Kanye West himself.

Now Amber Rose has been uncharacteristically quiet about the reality TV family. As a matter of fact, Rose has been borderline defensive of the Kardashians since the cancellation of her much anticipated MTV reality show with BFF Blac Chyna. The reality show featuring Amber and Blac was a certain ratings dynamo with many clamoring to learn some of the Kardashians dirty secrets during the course of the show.

Then out of nowhere, the show was cancelled and the excuse was that Amber Rose and Blac Chyna were just too booked up to shoot a series together. What we want to know is too booked up with what? It’s not that hard to bring a camera crew to film two women who already hang out together and show the world what they do.

Who wants to bet the reality show shutdown was influenced by someone in the Kardashian camp? Maybe that’s why Amber Rose is keeping her mouth shut about her biggest frenemies as well. Rose finally realized that her career is toast if she keeps on feuding with reality TV’s “it” family.