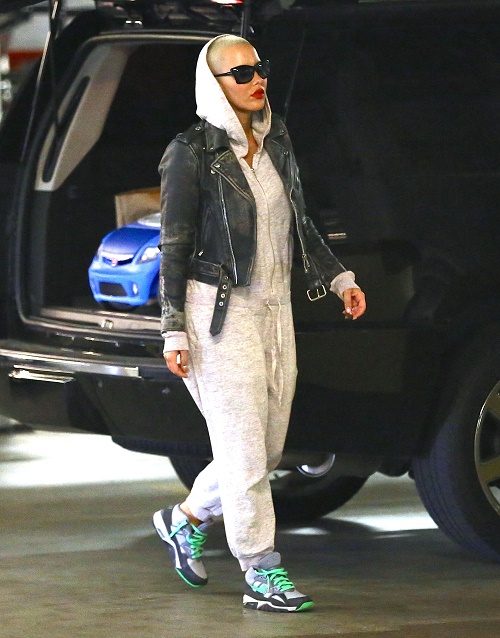 Amber Rose and Khloe Kardashian engaged in a volatile Twitter feud a few days ago, but Amber is now claiming that she doesn’t harbor any ill feelings towards Khloe. Ok, Amber, we believe you.

In fact, Amber tells Entertainment Tonight, “I could have totally minded my business when it came to her sister [Kylie Jenner], but me being a dancer at such a young age, dealing with older men gave me the humility and knowledge to speak on such a subject.” And by humility and knowledge, Amber means the tweets she sent out calling Kylie Jenner’s relationship with Tyga inappropriate and wrong.

Following those tweets, Khloe Kardashian took it upon herself to defend Kylie and put in a few well-placed barbs against Amber, which then led to the full-blown Twitter feud. However, Amber makes it seem like she was willing to step down at any time, adding, “I can understand why it came across the wrong way to her. But that’s a phone call she could have had with me. [Khloe] didn’t have to tweet 11 times and try to humiliate me when, the only reason why these girls have careers is because their older sister had a little fun on tape.”

See, the thing is, Amber Rose is absolutely 100% correct in everything she’s saying, but she’s Amber Rose. It’s like when Donald Trump starts making sense – what are we supposed to do, forget all the other crazy things he said because he’s being sane for once in his life? Sure, Amber Rose is nowhere near the level of Donald Trump, but the principle still stands. The Amber Rose-Khloe Kardashian feud did start because Amber couldn’t resist poking the hive, knowing full well what would happen if she did. And instead of leaving it alone, she goaded Khloe Kardashian into replying, and is now trying to appear as the bigger person.