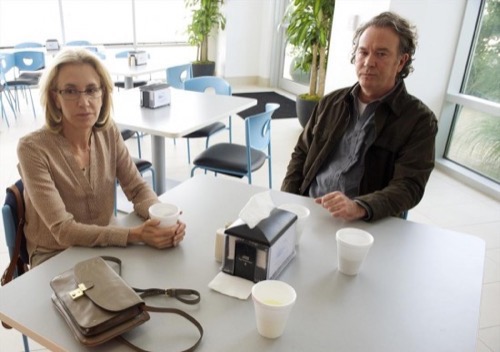 Tonight on ABC American Crime airs with an all new Thursday March 12, season 1 episode 2 called, “Episode Two,” and we have your weekly recap below. On tonight’s episode Barb [Felicity Huffman] and Russ [Timothy Hutton] face Carter and Aubry, who are reunited for the first time since being arrested more than a day ago. Meanwhile, a terrified Tony lands in juvenile detention, testing the resolve of his father, Alonzo; investigators find an existing warrant for Hector’s arrest in Mexico; and emerging facts about Matt and Gwen strain the relationship between their parents.

On the last episode, in the premiere of this drama, a home invasion left a war veteran dead and his wife seriously injured, but the ensuing investigation created more questions than answers as a seemingly cut-and-dried case is anything but, a fact that the deceased man’s divorced parents came to realize when they arrive to bury their son. Did you watch the last episode? If you missed it, we have a full and detailed recap right here for you.

On tonight’s episode as per the ABC synopsis, “Thirty-six hours have passed and reality is starting to sink in for all sides. Barb and Russ must come face-to-face with the suspects, Carter and Aubry, for the first time at the arraignment hearing. For Aubry and Carter, the hearing is their first opportunity to see one another since being arrested. Elsewhere, Tony finds himself terrified and alone as he gets placed into juvenile detention. The gravity of the situation weighs heavy on his father, Alonzo. Hector’s legal troubles are compounded when the investigators discover an existing warrant for his arrest in Mexico. With more unsettling facts being uncovered about Matt and Gwen, relations between Barb and Russ, and Tom and Eve grow increasingly strained as they disagree on where Matt’s body should be buried.”

As the murder trial is underway, it’s the innocents in this case that are being punished. Take for example Tony. He’s just a kid and even his actions show he was childishly short-sighted when he rented out his father’s car. But, for an unknown reason, he’s been sent to a juvenile detention facility until the investigators in the case could either pin an accessory to murder charge on him or just live him in care until he eventually he ages out due to adulthood.

And for what? He gave the detectives everything and this is how they treat him. They heard him confess his innocence and admit to handing over his car to a pretty shady guy for 50 bucks. Yet that was all. That was all he gave them and now the system is using it against him when deep down even the detectives must know he didn’t take part in Skokie’s rape, murder, and robbery.

Meanwhile the real culprits in such a devastating crime care about each other more than what they actually did. Aubry and Carter were finally reunited, albeit for a few minutes, during the initial hearing for their trial and it was like nothing else existed for them. They honestly only had eyes for each other and in any other case someone could have romanticized them. But this time, the families of the victim didn’t want to see a murderous couple moon after each other. They wanted repentance.

Barb wanted to know they regretted murdering her son and unfortunately she never got that. And she won’t stop following this case until she sees them punished or at the very most broken.

Barb is kind of tough woman to deal with. So when she sets her mind on something then people around tend to give way. But that tactic of hers doesn’t seem to be working this time around because no matter how much she tries to bully the detectives (a black female detective in particular)into stop spreading “lies” about her son – it’s not working. And the facts are this: Piles of prepackaged meth were were found on Matt’s property and he could have only have done that if he were looking to sell it down the line.

So she has to face facts. Her son was a man and that means he started to make his own decisions for quite some time now.

Gwen hasn’t woken up yet and each day her coma drags on – the chance of that grows smaller. So, before they had heard from the detectives, the parents wanted to transfer their daughter to a hospital little closer to home. But they were forestalled in this when they asked Barb and Russ if Matt could be buried somewhere near their daughter.

Barb thinks her son Matt should be buried where he made his home so she doesn’t want him moved. Nor does she care about Gwen’s parents’ reasoning. Thus, Russ was eventually dragged into the argument.

Gwen’s parents wanted Russ to talk some sense into Barb but, in this, he was no help.

And then the evidence came in and none of the petty arguments seemed to matter. Particularly, as DNA testing proved there wasn’t a rape. Gwen had had sexual activity prior to her death and with two men yet all signs point to that encounter being consensual. So there wasn’t a rape and the two men being accused of such are innocent of that crime.

However, as this case continues, lines between what’s right and what’s wrong begin to blur.

Barb wants her son’s crime to be deemed a hate crime yet how is anyone going to listen to her when she throws words “like you people”. If anything that only makes her look like a racist.

And then there’s Tony who is suffering in juvie for helping out Hector. A man he suspected of being in a gang and nothing else. And Hector in turn is, oddly enough, making a deal to flip on Carter. So who is being punished here?