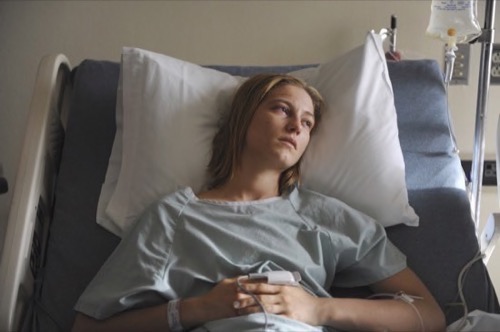 Tonight on ABC American Crime airs with an all new Thursday April 16, season 1 episode 7 called, “Episode Seven,” and we have your weekly recap below. On tonight’s episode, Tony’s arrested again and sent back to juvenile detention after an incriminating video surfaces. Meanwhile, Aubry [Caitlin Gerard] is asked to testify against Carter, [Elvis Nolasco] who’s in solitary confinement, in order to stay out of jail; Mark’s [David Hoflin] fiancée, Richelle, [Gwendoline Yeo] has an awkward first meeting with Barb; and Aliyah plans a peaceful demonstration to support her brother when the prosecution isn’t interested in new evidence that could help him.

On the last episode, following Carter and Aubry’s failed attempt to flee the country, Barb became more dogged in her fight for justice and turned to media outlets to bring more attention to her son’s case. Aubry was held in hospitalized care and continues to push her family and the authorities away. Back behind bars, Carter’s situation worsened and Aliyah was desperate for contact with him. Elsewhere, Tony took drastic measures to find out who attacked his sister and make him pay. With pressure mounting, Detective Palmer and DDA Soderbergh turned to Hector for the damning testimony they are looking for. However, a significant piece of evidence was uncovered that changes everything for the prosecution. Did you watch the last episode? If you missed it, we have a full and detailed recap right here for you.

On tonight’s episode as per the ABC synopsis, “while Carter sits in solitary confinement, Aubry blindsides her family when asked to testify against Carter in order to stay out of jail. Meanwhile, an incriminating video leads to Tony being re-arrested and sent back to juvenile detention. Elsewhere, Mark’s fiancé Richelle (Gwendoline Yeo) arrives in Modesto and meets Barb, who unashamedly questions her plans to marry Mark. Aliyah meets with a new investigator who provides her with damaging information that could help Carter. Once the prosecution refuses to hear this new evidence, she becomes determined to hold a peaceful demonstration.”

Aubry was offered a deal. In exchange for testifying against Carter, she was told all charges against her will be dropped. Including the attempted murder of a known drug dealer that would have normally carried a sentence of fifteen years. So on tonight’s brand new episode of “American Crime”, she has to make a monumental decision. Does she betray the man she loves or will she be going to prison, herself?

Unfortunately, though, neither scenario will help Carter. Hector has already made a deal in return for protection. It seems his former gang associates had done a number on his face and frankly turning on Carter was his only way out of an escalating situation. So, you see, Aubry’s testimony wasn’t needed but adding it to the case was just the final nail in Carter’s coffin.

In more ways than one!

Carter loves Aubry. That’s a fact and even if he doesn’t make it out of prison, and with the way he’s being beaten there’s a high chance he probably won’t survive until trial; the one thing he wants most is for Aubry to be ok. The last he saw of her, she wasn’t doing so well. And that’s something his sister simply couldn’t understand at first.

Then Carter told her how Aubry had saved him. For there was another time when she saved his life and that no one knows about. And that was more serious. The mess with the drug dealer that was mentioned earlier was merely him getting beaten up, but the time Carter came close to killing himself was a whole other matter.

Carter had tried to hang himself and Aubry had to lift him in order to stop his neck breaking so once Aliyah understood their connection – she finally stopped carping on about Aubry being a self-destructive white girl. And that’s because at the end of the day Aliyah loves her brother. Enough to know when to back off else she wouldn’t be fighting for him with him like this if she didn’t.

But, sadly, not everyone has that kind of support in their life. Barb only thinks she loves her son like any good mother would yet that couldn’t be farther from truth. For example, Barb met Mark’s fiancée tonight and instead of going into the meeting wishing to know more about her future daughter-in-law – she tried to talk that woman out of marrying her son.

At the time, she claimed Mark shouldn’t be making any big decision right now with what’s going on with his family. But both mother and fiancée knew what the real problem was. Barb didn’t want her son marrying some Asian girl.

Barb is a bigot. She’s also pushy, highly insensitive, and courting way too much publicity. So later when Russ got fired from his job because he failed to notify his boss that he was a former felon – he couldn’t help laying the blame on his ex-wife’s door. If she hadn’t been talking about their family so much on TV then maybe he wouldn’t have come under such scrutiny.

So in Russ’s time of need he turned to Gwen’s father for help. It seems he thought Tom could speak to Barb for him. About possibly being more discreet. Yet Tom turned him down when he asked.

He said his daughter wouldn’t be in the position she’s in now if it wasn’t for Matt. And so Tom doesn’t want to entangle his family in even more with the Skokies. He just wants to focus on helping his daughter get better.

Plus he personally felt done with both Barb and Russ. Barb was judgmental and Russ was a wimp but they were both liars hoping someone else could clean up their mess.

And you can say Tony is like that as well. Later when he got arrested for beating up the kid that hit his sister – he somehow tried to blame everything on his father. Like it was his father’s fault that he screwed up yet again. And so Jenny finally had enough. She moved out the family home and told her dad she was going to go stay with her aunt and uncle.

She told her dad that it was time he started dealing with Tony on his own rather than relying on her for support.

And as for Aubry, she might have told the truth but it wasn’t about Carter. Apparently, she claimed her brother and his friends had molested her when she was younger and after she told the cops that – she then said “look I’m not mentally competent to testify”. But does that mean her brother is innocent or is Aubry simply using what actually happened to her advantage?