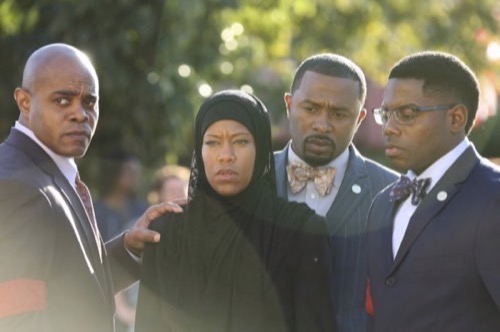 Tonight on ABC American Crime airs with an all new Thursday April 23, season 1 episode 8 called, “Episode Eight,” and we have your weekly recap below. On tonight’s episode, Aliyah’s [Regina King] march for Carter [Elvis Nolasco] escalates an already tense situation in the community as the city tries to shut it down, while Barb [Felicity Huffman] organizes a group of counterprotesters. Elsewhere, Alonzo [Benito Martinez] urges Tony, who may be tried as an adult, to testify against Carter; Hector swears to his girlfriend that he’s ready to turn over a new leaf; and a desperate Russ hopes to move into Matt and Gwen’s house.

On the last episode, while Carter sat in solitary confinement, Aubry blindsided her family when asked to testify against Carter in order to stay out of jail. Meanwhile, an incriminating video lead to Tony being re-arrested and sent back to juvenile detention. Elsewhere, Mark’s fiancé Richelle (Gwendoline Yeo) arrived in Modesto and meets Barb, who unashamedly questioned her plans to marry Mark. Aliyah met with a new investigator who provides her with damaging information that could help Carter. Once the prosecution refused to hear this new evidence, she became determined to hold a peaceful demonstration. Did you watch the last episode? If you missed it, we have a full and detailed recap right here for you.

On tonight’s episode as per the ABC synopsis, “as news of Aliyah’s organized march for Carter’s cause spreads, tensions and emotions within the community rise. The city tries to stifle the demonstration and the DA attempts to offer Carter a plea deal. Demonized and the target of violent threats, Barb refuses to back down and desperately rallies her own group of supporters to attend the march. Once again placed in juvenile detention, Tony could be charged as an adult. Alonzo urges him to testify against Carter to gain some leniency. Hector reconnects with his girlfriend and promises to turn his life around for her and their daughter. Unemployed and out of options, Russ turns to Mark for help in allowing him to move into Matt and Gwen’s house.”

Aliyah’s plans have created a bit of a stir on tonight’s all new episode of “American Crime”. And it’s the repercussions of that that’s going to do more harm to her cause than good.

See, Aliyah is holding a protest. She believes her brother is being railroaded so she’s called upon her community to stage protest in his name. However not everyone is as happy about that as she is. Including the brother she’s trying to fight for.

Carter was interviewed about his opinion on this protest his sister was holding. And though he found her actions to be honorable, he just didn’t understand why anyone would do that for him. So he was humbled.

But then he was insulted when the interview suddenly made the interview less about the protest and more about the fact its hiding what Carter’s case is really about. Apparently, despite being told to be objective, the interviewer firmly believed Carter was guilty and so he questioned him on his sister’ “antics”. Like why is the protest making people feel bad/ sympathetic towards a man that is currently on trial for a racially motivated murder?

So Carter later heard from his lawyer about a plea deal, he wondered if it would be easier to simply take it. That way Aliyah didn’t have to get dragged down with him and one day he could even be released. Though, when Aliyah heard about the deal, she was firmly against it. She said he shouldn’t settle and then she told him he wouldn’t be able to survive the years in prison. Which in all likelihood is true.

Carter had tried to commit suicide one already. Hence his sister didn’t want to take the chance he might do it again.

But Barb on the other hand is against the plead deal for her own reasons. Ones that don’t necessarily involve getting justice for her son Matt.

Barb wants Carter dead. In her mind, that’s the only way she can properly get justice. And so she went to Gwen’s parents to see if they would join her in their own protest against the one Aliyah was holding.

Though, they turned her down. It seems they’ve had enough of the Skokie family and now they just distance themselves from them.

Plus, they barely wanted to help Russ and earlier he was on their side. They did arrange things so that Russ would clean up Gwen and Matt’s home in lieu of rent. But that was because they needed someone for the job. And still, by doing that, they considered that to be big concession on their part.

So Barb tried to rally other people to her cause and unfortunately no one was willing to stand with her. No one decent that is. Especially as the group that did offer to support Barb was a part of the “separatist movement” meaning they wanted to go back to the days of segregation and keeping the races separate. But other than them, Barb didn’t have anyone else.

Thus she wanted to take them up on their offer. Yet to do so would mean she was confirming she was racist and that’s something Barb didn’t know she was until now.

Elsewhere, Tony’s situation doesn’t look good. And with video evidence, the DA feels like they try him as an adult and get him sent away. So the only solution to their problems is for Tony to turn on someone else.

And Alonzo told his son that he wanted him to testify against Carter though, technically, Tony didn’t know or see anything. So anything he said would have had to be made up.

However, Alonzo didn’t care about that part. He just wanted his son to get what Hector got. Hector is going to testify against Carter and in exchange he received a deal for that. He’s received protection and he’s in the middle of working out a deal to provide for both him and his family.

What with being an illegal immigrant, providing for his family ended up being a lot tougher than he thought. So Hector wants to finally do right by them and he hope his former girlfriend would allow him to take care of her and their daughter. But, sadly, this case might not the opportunity for it that he thinks it is.

Aliyah’s protest went ahead and Barb’s counter-protest went ahead. But the one thing no one wanted was for a certain group to be there as well. Because, like they suspected, that lead to tension. And, eventually, someone let a shot off and the police hands their hands tied by it – they had to move to action.

And several people ended up getting hurt.