BY Kristine Francis on May 7, 2015 | Comments: one comment
Related : Recap, Television, TV 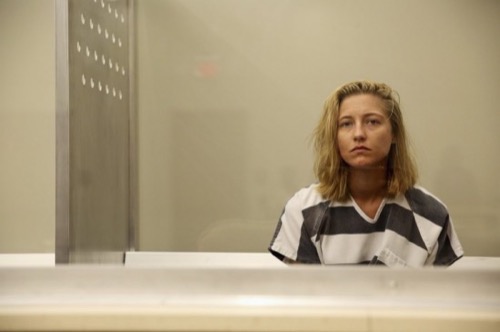 Tonight on ABC American Crime airs with an all new Thursday May 7, season 1 episode 10 called, “Episode Ten,” and we have your weekly recap below for you. On tonight’s episode Aubry’s [Caitlin Gerard] statement about Matt [Grant Merritt] and his role in the incident completely changes the course of the case, but it’s a development that’s too much for Barb [Felicity Huffman] to bear. Meanwhile, Carter [Elvis Nolasco] gets a new lease on life, but Hector’s testimony is rendered meaningless, and he’s turned over to Mexican authorities; and Alonzo’s family comes together even as he struggles to find character witnesses to vouch for Tony.

On the last episode, following the march in support of Carter that erupted in violence, Aliyah and her lawyer used the turn in public opinion to leave the court no choice but to move up Carter’s preliminary examination date. Emotions felt by the families on both sides of the case came to a head when Aubry’s mother, Ruth, set up a meeting with Aliyah. Meanwhile, Russ continued to work on Matt and Gwen’s house as a meant to fill a void created by his regretful decision to abandon his family years previously. Desperate to do everything he can for a now fearful Tony in juvenile detention, Alonzo turned to an unlikely source for help. After Aubry received news from Carter, she was left feeling emotionally distraught. She made the decision to completely change the course of the case by going on record with an incendiary statement. Did you watch the last episode? If you missed it, we have a full and detailed recap right here for you.

On tonight’s episode as per the ABC synopsis, “Revelations from Aubry’s recent statements have far-reaching implications as new and damaging allegations against Matt Skokie’s role in the incident come to light. This setback is finally one that from which Barb will be unable to recover, leaving Russ to pick up the fight. Carter is handed a new lease on life while Hector’s prospects turn for the worst after Aubry’s account renders his testimony regarding Carter and the murder weapon inconsequential. Hector’s immediately deported and turned over to the Mexican authorities. Elsewhere, though Alonzo struggles to find character witnesses for Tony’s upcoming hearing, his family unifies.”

With Aubry’s confession on record, the DA had no choice. They had to take a second look at their case against Carter and this time they had to verify everything. Starting with Hector’s testimony.

Hector technically had every reason to lie. Not only did he receive a plea deal in exchange for testifying against Carter but he also got immunity for all of his own crimes. And so before the authorities can carry through with the deal they had with Hector, his “story” had to be double checked and not by people hoping to close the case as fast as possible. So Hector was asked to go over his story and look at all the evidence again.

And, you know what, he didn’t remember what Carter’s gun looked like. Thus when they showed him a picture of the wrong gun and he falsely identified it –more than once – he found out his plea deal was now off the table. Apparently Hector co no longer be trusted.

When, really the deal was removed because Hector couldn’t be considered a credible witness. He had been caught in a lie and that meant even if he was telling the truth about Carter then it wouldn’t even matter anymore. All anyone would recall is that he lied. And if he could do it once then he could easily do it again.

So, despite everything he did to avoid it, Hector found himself getting deported. There’s a warrant for his arrest in Mexico for murder and he soon he’ll have to face charges.

Meanwhile Aubry’s confession didn’t really go down that well with Russ and Barba. Typically, Russ is the calm one out of the two but when he heard his son had been accused of domestic violence and attempted rape – he snapped. It was one thing for him to realize his son had been an addict. And also a bigot! But Rape was something else.

If such an allegation was true then he couldn’t keep denying that his son was a monster. And so Russ refused to believe it. He said Aubry had to be lying to protect Carter and then he demanded the DA fix it. Make Carter the bad guy again.

Aubry knew things about the case that hadn’t been revealed to the media. So that made her claim plausible at least. And also Aubry didn’t care about what happened to her. Even if that might ultimately mean the death penalty.

And as for Tony, his father got him a private defense attorney and she advised him to show remorse. Which is easier said than done. And she told him that they needed a character witness to speak up for him.

However, Alonzo went to everyone and there aren’t a lot of people that want to defend Tony’s actions. And that goes for one of Tony’s teachers. Because just like Tony was a student, so too was the guy he put in the hospital. And Tony’s victim still needs two more surgeries before he can be released.

So before Tony could be written off entirely, his sister finally spoke up. And Jenny told the judge about what had happened to her. That someone had beaten her up and her brother took care of it because he always tried to protect her.

And that got Tony released from the juvenile detention center.

But the ordeal this case has put everyone through was far from over. And by a certain point, it had all gotten to be too much. Surprisingly, Barb is tired out.

After she heard about Aubry and what could possible become of Carter – she told Russ she couldn’t do this anymore. She just wanted it all to end. Though, luckily, not by using her gun.

Barb later gave her gun to Russ for safekeeping and he in turned tried to help Barb. Especially as it looked like she was hanging on by a thread. So Russ ended up speaking to their other son Mark and he tried to get Mark to see his mother.

Since the information about Matt had started to filter out, Mark has been distancing himself from his family. But his father told him that he couldn’t do that because if he did then he would be no better than him when Russ had abandoned his family. And Barb may not be the nicest person in the world but she was his mother.

So Mark could at least acknowledge that and be there for his family as the trial continues.

Aubry had been deemed competent enough for trial and so she had plead guilty.