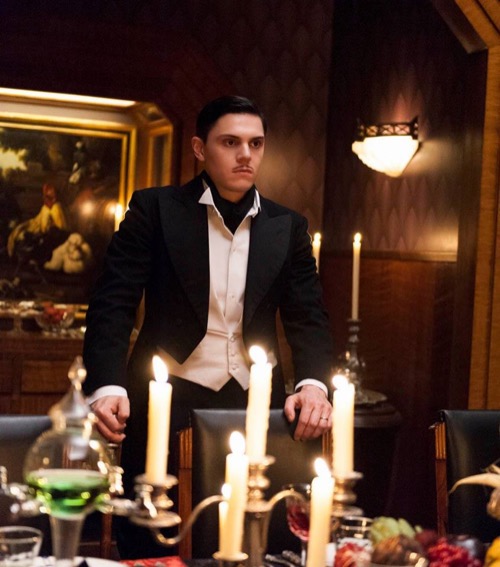 Tonight on FX our favorite creepy drama American Horror Story: Hotel airs tonight with an all new Wednesday October 28, season 5 episode 4 called “Devil’s Night,” and we have your weekly recap below. On tonight’s episode John (Wes Bentley) gets invited to a Devil’s Night Soiree.

On the last episode Alex hit a breaking point when Scarlett brings up memories of Holden and Donovan became a target of the Countess’s rival. Did you watch the episode? If you missed it we have a full and detailed recap right here for you.

On tonight’s episode as per the FX synopsis, “John gets invited to a Devil’s Night Soiree and Alex tries to diagnose Holden’s odd condition.”

Tonight’s episode of American Horror Story: Hotel kicks off with a man checking in at the front desk with Liz Taylor – his name is Ricky Ramirez. He says that he has a standing reservation at “Devil’s Night” an he reminds Liz that he died in 2013. Liz shows him to his room and says the mast left him treats on his pillow. His “treats” are hotel guests that are sound asleep. Ricky creeps in and beats the man over the head with a lamp and kills him. His wife starts screaming – Ricky tells her to swear to satan that she won’t scream. But, she does scream and tries to make a run for it, she runs down the hallway an right in to the arms of Mr. March, who helps his old pal Ricky finish her off.

The next morning John wakes up to his daughter calling him – he says he is going to pick her up to go shopping for her Halloween stuff. Scarlett tells her dad that she doesn’t want to go trick or treating with him, she wants to stay at her grandma’s house and make banana cream pie instead. John is distracted by blood dripping down his bedroom wall and tells Scarlett he will talk to her later. Upstairs Mrs. Evers is scrubbing bloody sheets in the bathroom, she has a flashback to 1927 – Halloween is a bad time for her, when she took her son out trick or treating that night he disappeared.

Detective Lowe rushes upstairs to see where the blood is coming from, Mrs. Evers invites him in the room and tells him about her missing son. Mrs. Evers reveals that her son was kidnapped, and he was taken to a ranch out in the country where he was murdered. Detective Lowe listes and is intrigued, since his son disappeared too. She never even got her son’s body, the killer disposed of them with quick lime and threw his bones in a mass grave. Mrs. Evers says that she and John are “kindred spirits,” and then she jumps up and starts cleaning and chirping about how much work she has to do before she runs out of the hotel room.

John’s wife Alex brought their son Holden home from the hotel, it’s obvious that there is something not right with him. She’s a doctor so she decides to do an exam on him – his temperature is only 75 degrees. Holden says he is thirsty, so she heads to the kitchen to get him a drink. When she comes back, Holden is drinking blood from their now dead dog. Holden tells Alex that he needs his “other mommy.” Meanwhile, John is at work – he researches Mrs. Evers kidnapped son and is shocked when he realizes the crime happened 85 years ago. And, he spots a photo of Mrs. Evers at the crime scene, she looks like she is the same age that she is today.

John heads down to the bar and Liz Taylor pours him a drink. A woman joins him at the bar – she bears an uncanny resemblance to serial killer Aileen Waurnos. John thinks that she is wearing an incredible Halloween costume. They start talking about the men that she killed, their conversation gets heated and then Aileen asks him when the last time was that he got laid. John is drunk, so he agrees to take her back to his room. Aileen knocks him out and ties him to a chair. She starts screaming at him and spitting on him. John shouts at her that she is insane, there is no way that she is Aileen Waurnos. Aileen scoffs, “Welcome to Devil’s Night.” John breaks free and tackles Aileen and handcuffs her to the sink in the bathroom. He goes through her wallet and finds an ID – it says that she really is Aileen Waurnos.

John heads back downstairs and demands that Liz Taylor tell him what Devil’s Night is – she explains that it is super exclusive, and only Mr. March’s private guests are invited. But, Mr. March left an invitation for John at the desk. Lis Taylor makes it sound like it is a huge honor. John heads back to his room and Aileen is gone – he finds a suit on his bed, laid out for him to wear to the event.

John gets dressed and heads to the soiree, Aileen invites him to sit down with her and the other serial killers. Mr. March pours them all a drink of absinthe, and he invites John to sit down at the dinner table. John argues that he can’t be Mr. March – because he died over 80 years ago. March scoffs that he has lived in the hotel long enough to know that what isn’t possible, can become very possible. Someone arrives late to the dinner party and he is dressed in a black hood. They go around the table and introduce themselves, John Gacy, Jeffrey Dahmer, and Richard Ramirez are all in attendance. Detective Lowe still isn’t buying it, he thinks that it is some sort of Halloween prank.

After they are done discussing their murders, Gacy handcuffs John to a chair – Mr. March gifts Dahmer with a human. John watches confused as Gacy pours acid on to his victim’s brain. Mr. March gives a twisted speech about how the serial killers have made their marks on history, and their stories will live on forever. He invites them to join him for desert – and they all start cheering. Sally brings in desert, it’s a guy who is high as a kite – Sally says that he is “riding on an eight ball of white.” And then she leaves the victim with them. John watches in horror as March cheers to them being the greatest killers of all time – and then says that “this sacrifice will bond them for eternity.” They start hacking the victim up on the table.

John starts screaming at them to stop – and then he wakes up on the floor. Sandy tells him that it was all a dream, and he was hallucinating because he drank absinthe. Sandy promises to protect John, and then takes him back to his room. He seems convinced that it was all just a bad dream.

Alex shows up to the hotel and says that she doesn’t want to lose Holden again, she agrees to the Countess that she will “surrender completely.” The countess agrees to turn her, she cuts her chest and has Alex drink her blood – and then she rocks Alex to sleep and promises she will be with her child for “All eternity.”