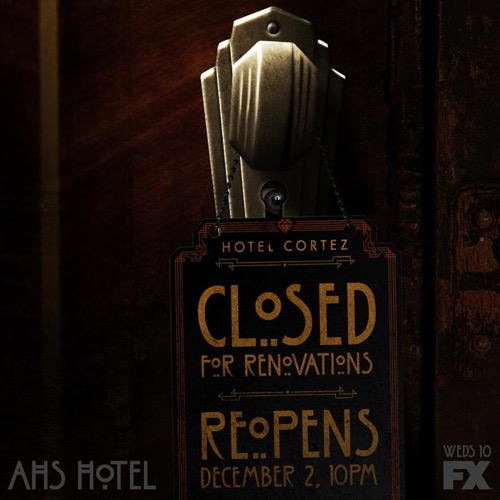 American Horror Story: Hotel is the fifth season of the FX horror anthology television series American Horror Story. The plot centers around the enigmatic Hotel Cortez in Los Angeles, California, that catches the eye of an intrepid homicide detective (Bentley). The Cortez is host to the strange and bizarre, spearheaded by its owner, The Countess (Gaga), who is a bloodsucking fashionista. This season features two murderous threats in the form of the Ten Commandments Killer.

On the last episode Drake’s renovations uncovered a great secret; John under went psychiatric evaluation; and the Countess learned the fate of her first love. Did you watch the episode? If you missed it we have a full and detailed recap right here for you.

On tonight’s episode as per the FX synopsis, “John closes in on The Ten Commandments Killer. Sally’s arrangement with March is revealed.”

Tonight’s episode of American Horror Story kicks off with John standing over Wren’s dead body, she just ran in front of a semi truck and killed herself. John runs straight to the hotel – he screams at Liz Taylor and demands to know where the Ten Commandments killer is. While John is arguing with Liz, Sally arrives. She offers to take John to see the Ten Commandments killer – she leads him upstairs to Room 64. Sally says that it used to be James March’s office – he died right there years ago.

John thinks that Sally is playing with him, she promises him that all of the answers are there – he just has to look behind the armoire. John slides the armoire to the side and finds a secret door, it leads to some sort of Dr. Frankenstein looking lab with glasses full of body parts. Sally breaks down every body part – and what crime they came from. John says there was a 90 year lull, Sally explains that was how long it took March to find a successor to finish his work.

John drops to the floor and starts having flashbacks – he breaks down sobbing and realizes that he is the 10 Commandment killer that took over John March’s work for me. He cries that it can’t be possible – Sally rocks him back and forth and tells John that it has “always been him.”
John shows up to the morgue – his partner is standing over Wren’s body. John announces that he has come to confess for the 10 Commandment killings. He says it all started the night he walked in to the Hotel Cortez – it was 5 years ago. He needed a few drinks after solving a gruesome murder. John walked in to the bar and Liz Taylor poured him a drink. John met Donovan and he invited him to a party upstairs. March and the Countess were having their monthly dinner – Donovan interrupted to introduce them to John.

March kicks everyone out so that he can get to know John, he says that he is “struck by the intensity of John’s aura.” Apparently, John’s aura is as “black as the ace of spades.” March tells John all about his aura while he pounds cups of absinthe. John begins ranting that if the cops would take a leash off from him – there wouldn’t be any crime left in the city. Apparently, John and March stayed up talking for 3 days straight. After John finally passed out, March informs Countess that he is “the one.” The Countess agreed to help March train John by kidnapping his son – John knows that losing his son will be the nudge that John needs to “go dark.”

John continues to tell his partner about the five years he spent “getting to know” March – he reveals that on the anniversary of Holden’s disappearance, March reigned him in by telling him that there was a pedophile staying at the hotel – his name was Gamboa. After he checked out of the hotel, John traked him down with a Craigslist ad and proceeded to murder him in cold blood, beating him to death with a sledgehammer.

After his first kill, John had a meltdown and tried to commit suicide by hanging himself. But, March appeared out of nowhere and cut him down – she was like a shadow that never left his side. John confesses that he cheated on his wife with Sally, on a regular basis. But, the night he tried to hang himself – she was just going to let him die, because then she could turn him and be with him forever. John’s partner shows him a picture of Sally – apparently she has been dead since 1994, she jumped out of the hotel and committed suicide. He tried to explain to John that he is just confused – and these people are all dead, John isn’t buying it though.

After John’s first kill, he confessed to March that he loved it, but it iddn’t bring his son Holden back. March reassures him that he made a positive first step. Then, he takes him to his office and shows him the body parts in jars from the 10 Commandment killings. March convinces John to pick up where he left off and finish the 10 Commandment killings in honor of his son Holden.