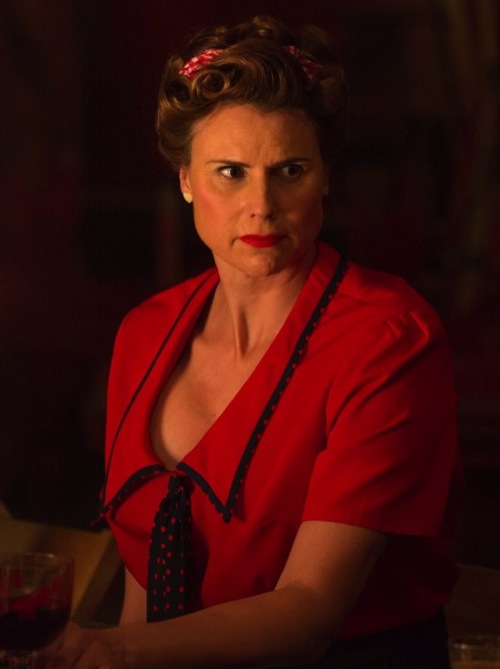 On the last episode Elsa prepared for her move to Hollywood. The Twins grew enamored with a traveling salesman. Dell plotted Jimmy’s escape from police custody. Written by Jennifer Salt; directed by Michael Goi. Did you watch the episode? If you missed it we have a full and detailed recap right here for you.

On tonight’s episode as per the FX synopsis, “Dandy gives the Twins troubling information about Chester. Maggie vows to prove her loyalty to Jimmy. The Freaks enforce their harsh code of justice.”

Stanley gets out of his car. It’s pouring down rain. The freaks are having a feast in the big tent. Elsa is at the head of the table; Stanley’s sitting down with them. Elsa raises a toast to the Show’s new owner, Chester — who’s sitting with his puppet friend, Marjory. He stands and gives his best wishes to Elsa. Elsa excuses Chester, saying she’d like to have a moment alone with her people. Once he leaves, Elsa toasts to another man, Stanley, saying they have him also to thank for changing the course of their lives.

Maggie and Desiree look at each other and basically roll their eyes. Everyone raises their glasses. Elsa says that soon all her freaks will be on national television on the Elsa Mars Hour. Next, she says that everyone will be watching her favorite movie later — a movie about freaks. Stanley doesn’t know the movie. Elsa asks Eve to explain to him the plot: It’s basically about someone who betrays a group of freaks. It seems as if Elsa has some new information about Stanley’s true motivations and intentions.

Stanley, nervous, tries to leave — but nobody lets him. They have a present for him. In comes a giant box. Desiree says that she thought long and hard about him while she “made it.” Stanley opens the box and sees a jar holding the head of the museum owner — the woman to whom he was selling Freak specimens to.

They put him on Elsa’s spinning wheel of fortune. She throws two knives into the wooden wheel. She misses his body. Knowing her skill, we know she’s doing this on purpose. Stanley, fearing for his life, admits that his being there was all just an act but that he ACTUALLY does know people in Hollywood. Elsa says that he killed her dream but that she will not allow him to murder them. She says, “You brought death into this place” and that what he did is unforgivable.

They take him off the wheel. Elsa throws a knife into his thigh. He pulls it out. Elsa tells him to start running. Stanley tries to throw everyone off by revealing the fact Elsa helped kill Ethel Darling, but everyone is too caught up in the morning to trust him — or listen.

Stanley runs out of the big tent into the pouring down rain. All the freaks come out with various weapons. They hunt Stanley.

He crawls around trying to outrun them — but his efforts seem to get him nowhere.

Elsa is feeding Jimmy. Maggie is there with her. She tells him his father was killed — that they all played a part in it. Jimmy is angry. He says he doesn’t care what his father did and that they shouldn’t have murdered him. But Elsa says he murdered one of their own, the most vulnerable among them (that person being Ma Petite), and that he had it coming. Jimmy’s also mad at Maggie, saying he doesn’t forgive people easily. Elsa says he needs to try and that, if Maggie hadn’t come clean when she did, they would have a lot more dead bodies on their hands.

Jimmy is feeling broken and useless in his current state; he has no hands. Elsa says that she’s the only one here to look after him. She says that she has watched him grow from a boy into a man and from a man into a leader; they need him more than ever. He cries, “I have no hands! I can’t even take a piss by myself.” Elsa tries to calm him by telling him that she has an old friend coming to visit that will be able to give him new hands — prosthetics — once his wounds heal. Maggie is going to aid in this process.

While not many people know it in the camp, Elsa Mars lost her legs. She silently sympathizes with Jimmy’s ordeal.

Elsa leaves Maggie to tend to Jimmy’s wounds. He screams in pain when she washes his wounds. She says she hates hurting him. Jimmy is very mad, but Maggie says that she loves him — that part was always true, no matter what he might think. Jimmy basically tells her that she should get the heck out of town. But she says that she going to make things right, with him and the others.

Meanwhile, Elsa is preparing the stage for the show when in walks the doctor who gave her new legs. The reunion is quite touching. Soon, Elsa puts her arms around his neck and whispers, “You came.” He replies, “Of course.”

Chester and the twins are having sex. Marjory is looking on. She’s making the twins uncomfortable, so they ask if they could put her away. He pushes Marjory off the bedside table.

Later, Marjory is upset. She tries to persuade him that the twins aren’t as loving as they say and that they are just using Chester. Marjory tells Chester that he’s a murderer, but he says that she’s the one responsible. Marjory says that that’s impossible. After all, she’s just a doll. Marjory says that love makes him do crazy things; love destroys him. Chester tells Marjory that she can’t leave him, no matter what. Marjory says that those twins “have to go.” Chester agrees: “I know,” he says. “They will.”

The freaks are playing cards around a table. They finally realize that what Stanley said was probably true: Elsa killed Ethel Darling. They all agree to put a stop to Elsa for what she did.

Dandy comes to visit the twins. He says that he has some relevant information about their “current situation.” He reveals that Chester is an “absolute beastly sicko.” He presents them with the background file on Chester. They doesn’t want to look at it. Dandy leaves.

Jimmy’s in bed. He’s having night sweats. Elsa brings her carpenter friend, Massimo, to take measurements for Jimmy’s new wooden hands. Jimmy doesn’t want them at first, but then Elsa softens the shock by revealing to him her own two wooden prosthetics.

Chester talks with the freaks. Bette and Dot have one of their telepathic conversations. They say they’re not sure what to think about Chester now — now that they’ve read the file. They say that they no longer wish to be his assistant for the Box Sawing-in-Half trick. They leave the tent. Maggie says that she’d be happy to do it. She gets in the box, saying she already knows how the trick works.

They run through the show. Chester, confused, sees Lucy in the face of Maggie. Chester goes to saw Maggie in half, but she screams, saying she can’t move her feet up in the box. She says she doesn’t know what to do. Chester begins sawing and sawing and sawing. All the way through Maggie’s body. He separates the boxes. Maggi’s been sawed in half. The Freaks look on in horror.

Chester says that Marjory made him do it. He runs out of the tent.

Paul asks what they’re supposed to do now. Desiree says, “Bury the bitch.” She says that she had it coming.

Meanwhile, Chester’s freaking out in his tent. He goes ballistic and begins stabbing Marjory. He kills her; we see Marjory (the human girl Chester sees) bleeding to death. He begs her to stay with him.

Ethel introduces Lobster Boy. He says he’s not a performer like his mother; he says he hasn’t perfected his juggling act yet.

We flash back to the present. Eve is sitting with Jimmy, who’s reminiscing about his mother. Eve reveals to him that Maggie is dead. Eve asks if he wants the details. He shakes his head. Eve adds, “Elsa’s next. Tonight.”

Eve looks at the designs of Jimmy’s new hands. She’s happy that he’ll get a shot at a normal life.

The twins come to warn Elsa that her monsters are coming to murder her and that she needs to leave. Now. She doesn’t believe the twins. Elsa is distraught. She asks them, “But where will I go?” The twins tell her, “Anywhere but here.” Elsa wonders why they are saving her. The twins tell her that now they are even.

The Freaks venture into Elsa’s tent but they can’t find her. She’s gone.

Elsa is in the car. Dandy gets in. She thanks him for coming. He says he never refuses a lady in distress. Elsa confirms that she’s not in distress but that she is in a rush. She hands him an envelope and, in exchange, Dandy gives her a stack of money.

Meanwhile, Chester walks into the police station. He’s all bloody. He says that he’d like to report a murder. He’s carrying something in a blanket. When the officer unwraps it, they find Marjory the Puppet. Chester falls to his knees and cries out, “Send me to the chair!”

Morning arrives. Dandy shows up at the Freak Show with a paper stating that he’s the show’s new owner. The paper states that Elsa sold the show for ten thousand dollars.

Looks like Dandy’s finally getting his shot at show business.

Dandy goes into the big tent and walks onto the stage. He hears a muffle whining sound. Backstage, in a cage, is a mutilated Stanley. He was turned into a freak.

Massimo presents Jimmy with his new prosthetics. After the reveal, Jimmy says, “They’re perfect.” He tries them on. The hands are not shaped like regular hands; they are shaped like his claw hands. Jimmy has been made whole again.